Today, I’m sharing the best Disney Pixar LUCA quotes, a LUCA movie review for moms, and some easter eggs and fun facts about this sweet and heartwarming story.

Disney Pixar’s LUCA now streaming on Disney+ and my daughters and I just loved watching it together. Elisha joined in from her dorm in Provo, so we had an EF Girls watch party!

LUCA is about friendship and family, so it’s sure to tug deep and touch your heart, and a great tool to make memories connect with your children.

I cried, of course!

LUCA is a young adorable sea monster who has been warned over and over by his overprotective parents not to go to the surface.

When he meets Alberto, an adventurous sea monster who becomes his best friend, LUCA starts a journey above the surface in the town of Portorosso, that includes pasta, gelato, and fun rides, and leads him to follow his dreams.

Set in a beautiful seaside town on the Italian Riviera, Disney and Pixar’s original feature film LUCA is a coming-of-age story about one young boy experiencing unforgettable adventures.

LUCA has something for everyone: humor, heart, and a bit of action, which is why it’s PG. It is such a beautiful film, perfect to welcome the summertime fun!

Disney /Pixar’s LUCA is very dear to me because I love Italy so much that I actually speak Italian – it’s my favorite language in the world!

The CGI work is visually stunning and it was so vibrant you could almost feel and touch it. I loved how in the credits you could read “in our slippers” because the team animated LUCA from home!

The LUCA score is fabulous. If you’re into arias, you will be delighted and pleasantly surprised. I have taught my kids to love classical music, opera, and theater from an early age, so they were overjoyed, as well.

What Moms Need To Know About LUCA for Kids

Many moms ask me questions on what ages are appropriate for Disney Pixar’s Luca and whether Luca is safe for kids. Let’s break this up:

Language: Profanity is mild in that substitute phrases are used, such as: “Holy Carp!” and “Oh Sharks!” However, there are depictions of bullying and strong words are used: such as “jerk,” “idiot,” “stupid,” and “loser,” as well as intimidating phrases such as “I eat kids like you for breakfast” (Ercole), and somewhat disturbing ones like “Luca, I need you to punch his heart” (Lorenzo).

Mature Content: Luca lies to his parents, runs away from home, and engages in potentially dangerous behaviors, and some kids can come to the conclusion that you can do all of that with no major consequence, or that you could even be rewarded.

Besides bullying behavior, there is discrimination and prejudice, parental abandonment, and a lot of fear.

Positive Lessons: The plot points in LUCA can be used to teach valuable lessons of acceptance, inclusion, safe self-expression, active listening, coping with grief in a healthy way, and much more.

I really enjoyed the acknowledgment of the inner bully or inner critic and that it actually has a name! I believe it’s a great conversation starter that can help our kids know when fear is our friend and trying to keep us safe versus when it is keeping us from being all we can be and living a life we love.

These lessons are needed for people of all ages, really. I was inspired along with my kids. Plus, it’s a great introduction to learning another language!

LUCA has an extensive line up of charming characters that you will fall in love with.

A Collection of the Best Disney Pixar Luca Quotes

LUCA is filled with positive life lessons and features positive quotes that are funny, powerful, and inspiring.

I’m sharing some of my favorite Pixar LUCA quotes with you from characters Luca, Alberto, Giulia, Daniela, Lorenzo, and others.

Just a word of caution: you’re good at guessing plots and twists, these LUCA quotes may contain spoilers!

“Rules are for rule people.” ~ Alberto

“We underdogs have to look out for each other.” ~ Guilia

“The curious fish gets caught.” ~ Daniela

“The universe is literally yours.” ~ Giulia

“We can go anywhere, do anything. We just gotta stick together!” ~ Luca

“All you gotta do is follow my lead, remember?” ~ Alberto

“Mom, maybe his life is a little more important than your snacks.” ~ Daniela

“The world is a very dangerous place and if I have to send you to the bottom of the ocean to keep you safe, so be it.” ~ Daniela

“Everything good is above the surface. Walking, air, the sky, clouds, the sun…Woah! Don’t look at it!” ~ Alberto

“What’s wrong with you, stupido?” ~ Luca

“That’s called phantom tail. You’ll get used to it.” ~ Alberto

“We are incredible at that humaning stuff.” ~ Alberto

“I never go anywhere, I just dream about it.” ~ Luca

“Thank you, Giulia, for showing us the boring thing that takes us to the terrible place.” ~ Alberto

“There’s a million things you think you can’t do. All you need is a chance to try.” ~ Giulia

“It’s just the greatest thing that humans ever made…it’s the Vespa!” ~ Alberto

“Something’s fishy with you two!” ~ Ercolé

“You’ve got a Bruno in your head.” ~ Alberto

“Your reign of terror is coming to an end!” ~ Giulia

“Some people, they’ll never accept him. But some will… and he seems to find the good ones.” ~ Grandma Paguro

“My mom says sometimes I’m too much.” ~ Giulia

“Just remember we are always here for you.” ~ Daniela

“My life’s great. I’m just helping him out.” ~ Alberto

“Every night we’ll sleep under the fish.” ~ Luca

“I come to town on most weekends.” ~ Grandma Paguro

“Hey everyone, this is Smuca. He’s in charge now.” ~ Luca

“Wow. That was hard to watch.” ~ Alberto

“You just sit on it and it takes you wherever you want to go…in the whole stinkin’ world.” ~ Alberto

“Anchovies. They go there to sleep.” ~ Alberto

“This is too dangerous! They’ll see us!” ~ Luca

“This will be a breeze. Just don’t get wet!” ~ Alberto

“Underdogs, you know, kids who are different, dress weird or are a little sweatier than average.” ~ Giuilia

“You were just trying to keep him safe.” ~ Lorenzo

“What do you believe he kills with those?” ~ Alberto

“How could my mother tell him about the town of blood thirsty lunatics?!” ~ Daniela

“That guy kills things, for sure. What do you think he kills with those?” ~ Alberto

“We do not go anywhere near the surface. Got it?” ~ Daniela

“Hey, stop looking. She’s too beautiful for you.” ~ Alberto

“Do you really need to fish near the island?” ~ Luca

“Wow. That was hard to watch.” ~ Alberto

“This is gonna be the best summer ever. We’ll ride down every road, see the whole world together!” ~ Luca

“I doubt your school would even accept sea monsters.” ~ Alberto

I could go on forever – so many clever LUCA quotes!

[I thought this was so cool and my Padrino (Godfather) is also named Alberto!]

SOUND EFFECTS ~ When Luca gobbles up his first plate of pasta, Jacob Tremblay, who lends his voice to the character, was happy to provide the burp that followed. It turns out that burping on command is a special skill of the actor. I say YUCK!

MANGIA, MANGIA ~ Emma Berman (voice of Giulia) speaks fluent Russian and has an extreme love for spaghetti. She loves to go to her favorite neighborhood Italian restaurant in San Francisco, where she practices ordering food in Italian for her family. I love her!

GETTING IN SHAPE ~ Artists gave Giulia a distinct look, embracing triangle shape language—particularly in her hair and pants. She is so CUTE!

CAMEO ~ Director Enrico Casarosa provides the voice of the winning card player in Portorosso who shouts “Scopa!” He is also the fisherman in the boat who yells to a speeding boat, “What’s wrong with you, Stupido!” Bravo!!!

OUT OF CONTROL ~ There are 221 and 223 individual controls in Luca’s and Alberto’s mouths, respectively, to help animators create the rounded mouth expressions they use throughout the film. Whoa!

FISHY BUSINESS ~ One of Luca’s chores on his underwater family farm is herding goatfish. There are several real-life species of goatfish—some found in waters off the coast of Italy. I had no idea!

HIDDEN GEMS ON THE BALL ~ The iconic yellow, red and blue Pixar ball can be spotted on a rooftop as the Portorosso Cup bike race gets underway. I love Disney easter eggs!

PIECE OF PIE ~ Keep an eye out for the Pizza Planet truck in the form of a Piaggio Ape parked on a street in Portorosso. Talk about perfection!

FUN FACTS A WHALE OF A TALE ~ There is a poster for Walt Disney’s “20,000 Leagues Under the Sea,” which opened in December 1954, at the cinema in Portorosso. Brilliant plug!

TICKET TO RIDE ~The number on the train is 94608, which is the zip code of Pixar’s hometown Emeryville. • Pixar’s signature A113, the number on a CalArts classroom where many filmmakers studied, appears on a train ticket seen in the film. A113 can be found in so many films!

PRODUCTION DELIZIOSO! ~ Filmmakers traveled to Italy to research the local culture, architecture and overall feeling of the film’s setting. Food was a welcome highlight of their research. Director Enrico Casarosa, who’s a native of Italy, even treated team members to dinner at his parents’ house in Genoa. Ahhh… Can I come next?

TAKE A LOOK ~ When Luca and Giulia sneak a peek through the telescope, she mentions it belongs to a “Old Man Bernardi.” This is a nod to set supervisor Chris Bernardi’s lifelong love of astronomy and astrophotography. He personally owns six telescopes! That’s insanely cool.

KEEPING IT LOCAL ~ All of the background kid voices in the film were recorded by local children in Italy. I’m melting!

THAT’S AMORE ~ “Luca” director Enrico Casarosa was inspired in part by Italian films of the 1950s, including “La Strada” and “Roman Holiday,” among others. Pixar-created posters for both appear in the film. I gotta watch those now!

So there you have it… the best Disney Pixar LUCA quotes, fun facts, and review.

What are your top 3 favorite LUCA quotes? I know it’s hard to choose, but I invite you to share your thoughts in the comments below. 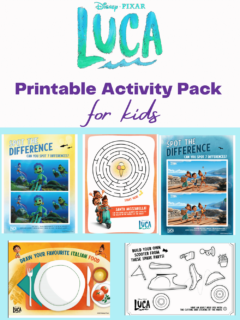 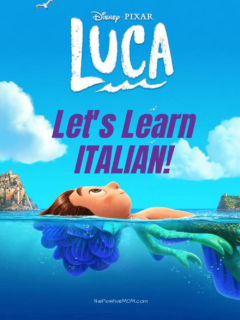 Next
Italian Quotes and Italian Phrases from LUCA
Click here to cancel reply.

Great movie and accompanying information and activity book! Thank you!

I like “You were just trying to keep him safe.” ~ Lorenzo

“We underdogs have to look out for each other.” ~ Guilia

“We do not go anywhere near the surface. Got it?” ~ Daniela

“Your reign of terror is coming to an end!” ~ Giulia

So many good ones to pick from!

My family really enjoyed this movie, it was great!