What You Can Do To End Racism and Discrimination

I’d like to say I have an instant, intelligent plan to end racism and discrimination. I don’t. I only have feelings of sadness, pain, and frustration. I only have the taste of bitter memories, the sting of humiliation, and the scars of injustice.

And today… I have tears. I have questions without answers. I have fear.

One of my favorite quotes of all times is that of Political Thinker Edmund Burke:

“The only thing necessary for the triumph of evil is for good men to do nothing.”

As I saw my Facebook feed today and learned about the disturbing and traumatizing Alton Sterling, and Philando Castile tragedies, my heart hurt as I wondered

“have I done nothing?” 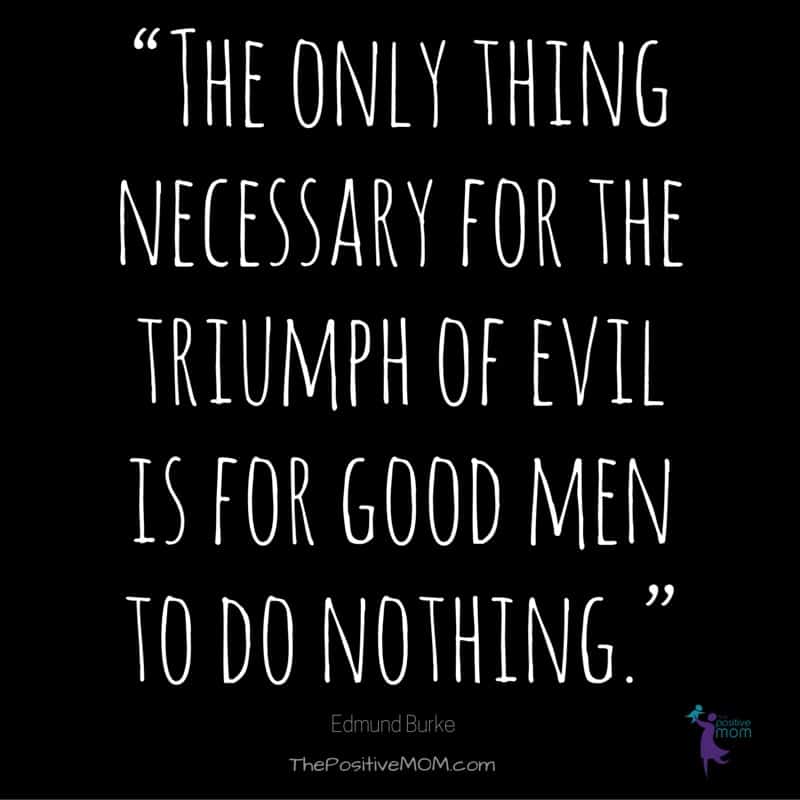 I interacted with many of my friends that shared my outrage. We chat privately on social networks, we talk on the phone, and we talk about it in our meetings…. but sometimes we are afraid to speak up.

Reverend Martin Luther King, Jr. had a dream. We all know that. But we know it because he declared it out loud at the Lincoln Memorial, Washington D.C. on August 28th of 1963. This was many years before I was born and long before the marvel we call Internet and the revolutionary creation of social networks.

Many people traveled to that historical landmark to support “the greatest demonstration for freedom in the history of our nation.” And today, when we can communicate globally with a simple click, we are still mourning lives, facing injustice, and feeling the pain of racial discrimination – and pretty much every type of discrimination there is.

I have a dream that my four little children will one day live in a nation where they will not be judged by the color of their skin but by the content of their character.

Dr. King’s dream is often shattered by poor decisions that are based on bias and pre-conceived judgment. Because the problem is that when someone looks at you through the lens of racism, they feel a false sense of entitlement to be judge of what the content of your character is.

I’ve told my kids about Sally, manager of the UPS Store in Fallbrook, California. Elisha was about 4 months old and I was pregnant with Elyssa. I went into the store to ask that a notary error on my temporary Power Of Attorney be corrected so I could actually get access to the bank account while my then husband was deployed to Iraq. Her customer service was reduced to:

I’d usually be flattered to be called Mexican. Some of the hardest working and most humble people are. But in her condescending tone and intentional slow speech (so I could understand “her English”), Mexican didn’t mean “from Mexico“… and I could feel that in my every pore.

And so did Elisha, when she was teased and singled out for being “Mexican,” at school.

And so did each of us when we know Taylor Bare’s parents don’t accept our precious 2-year-old as family because she’s “permanently tanned.”  This situation is inexplicable and inconceivable to us… but the rejection, the exclusion, and the demoralizing evaluations are so real.

Many people refuse to believe that racism still plagues us. They adopt a false sense of positivity, calling it “the benefit of the doubt.” I understand them, because segregation just doesn’t make sense to a non-racist and non-target.

Now that I think back, I can see that having somewhat lighter skin growing up, even in extreme poverty, afforded me some privileges above the darker kids in my neighborhood and my town. It’s so ridiculous that as such a mixed and diverse society back home we actually had a term for each shade of skin, and it seemed that as your shade got darker so did your odds to be treated as a worthy human being.

Fast-forward to moving to the United States, being a few shades darker has been made very obvious to me. I am often seen as “suspicious” and anything positive I do can be seen as “remarkable.”  And then there are other things that cannot be articulated because you can only feel their heat burn you…

Knowing what my kids face as bi-racial and multi-cultural kids in this society, it is awful to see how different they are treated back home where they are considered “white.” And even with the stereotyping and prejudice they go through here, the reality is that they are going to be unfairly advantaged when compared to unfairly disadvantaged children who are – or seem “black.“

Earlier this year, I was in tears and in awe listening to Camara Phyllis Jones, MD, MPH, PhD, president of the American Public Health Association, who defined racism as a system and shared one of her allegories on race and racism at the PHA Summit, which she calls “Dual Reality: A Restaurant Saga“

She compared our environment to a restaurant where some are sitting at the “Table Of Opportunity,” looking at an “OPEN” sign and wondering why there are hungry people just outside of the restaurant who “won’t come in” to enjoy the delicacies from the menu. These people, however, can’t come in because the sign reads “CLOSED” to them: it is a two-sided sign.

She explained how racism – and other “-isms” or systems of inequity – structure Open/Closed signs in our society. It is difficult for us to recognize any system of inequity that is privileging us, yet for those on the other side, they are very well aware of the two-sided nature of the sign. They can see the opportunity is closed to them but there are people partaking of its benefits on the inside. 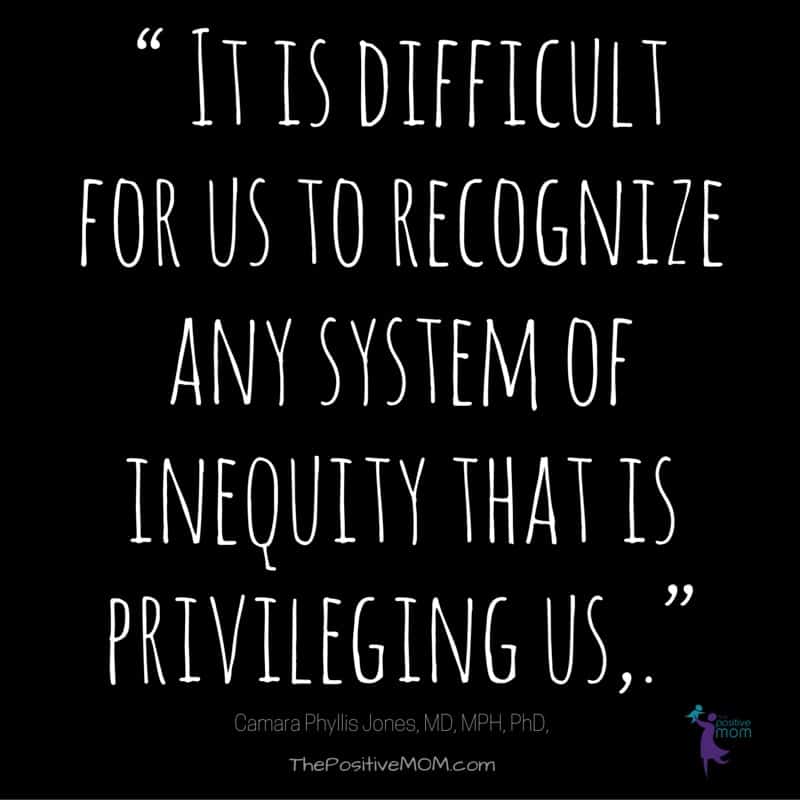 I gave this woman the biggest hug and flooded my Twitter feed with her words. Racism is so real to me that some commentary from the privileged felt invalidating to me.

“It’s hard to know the dual nature of the sign when all you ever see is “OPEN.”

And some say it’s all in our heads. And while I agree some of the stigma is internalized, the stats don’t lie: African Americans and Hispanic Americans have lower access to quality education, quality nutrition, and quality healthcare, yet are often expected to prove themselves to be considered equal to their “white/superior” peers. Yes… I said that… and you can quote me.

And that’s why I’m writing this tonight. I want to spread awareness, because as Dr. Jones said:

We have a long way to go.

When Reverend King announced his dream, a hundred years after the Emancipation Proclamation, he was disgruntled:

Over a half of a century later, I feel indignant to see that this is still true. But I also believe that, as moms, we can prevent the triumph of evil, because we can do something.

I still didn’t come up with a brilliant answer to rid our society of racism, but I do have a few dreams of my own. And I’m using the resources I have to share them in public:

I have a dream that every mom will take a strong stance towards acceptance and teach her child that each human life matters, that “all men are created equal.“

I have a dream that every mom can make a conscious effort to be an example of treating everyone with kindness and compassion, avoiding derogatory remarks and judgment… or apologizing when she catches herself.

I have a dream that every mom can develop the awareness to notice bias and discrimination and to use those unfortunate situations to teach her kids how segregation hurts everyone.

I have a dream that every mom will pray for the strength to stand up for equality and social justice in all the channels her voice is heard.

I have a dream that I can be that mom, that my children, my children’s children, and all my posterity can be compassionate and empathetic to the reality of racism and discrimination.

This is a global epidemic and it must stop… We must improve ourselves and teach our children… until Dr. King’s dream, my dream, and your dream becomes a reality.

I believe that the end of racism and discrimination starts with me and with how I raise my children. Not that I feel like the burden and the pressure is on me, but more like I can actually raise children who are accepting and can see beyond a person’s appearance or their past or current choices, and focus on their eternal nature.

And as much as we improve ourselves, we cannot teach this by osmosis or by ostrich-ism (I think you know what I mean!). We need our example to be coupled with education – and awareness.

Segregation is scary… and it has taken enough lives. But I believe in our children.

Train up a child in the way he should go: and when he is old, he will not depart from it. Proverbs 22:6

I believe that as our children grow up and become doctors, teachers, politicians, law makers and law enforcers, they can make the right choices. I smile as I think about those grown ups of all colors who are making a difference in their career, being a blessing to all of God’s children that cross their path.

Racism and discrimination must stop. I know I already said that, yet we are still witnessing unspeakable horrors, persecution, and brutality. Children are left fatherless and youth being taken in their prime.

Let’s use our influence as moms to teach our children we are all brothers and sisters and our diversity could make us strong if we appreciated our differences and focused on our similarities. Each living being is deserving of dignity, respect, freedom, and justice.

Our voices can unite to be the change we want to see in the world… in a world where there are children of many beautiful colors and lifestyles… all precious to God, unconditionally.

And as we teach, we can learn. As we get on the spotlight of practicing what we preach, we can actually be held accountable… and we can be the change we want to see in the world.

What do you do to end racism and discrimination? Share your story and your thoughts with us below to spread awareness. 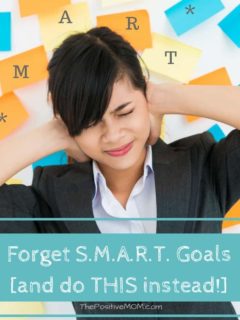 Previous
Forget SMART Goals - They're Not So Smart After All 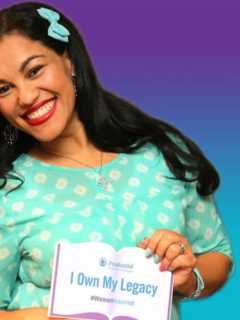 Next
It’s Time To Teach Your Daughter To Be Money-Smart
Click here to cancel reply.

[…] your family. I’ve been an advocate of social change in the areas of financial literacy, diversity and inclusion, domestic violence, and access to proper nutrition and healthcare, and many other social topics I […]

[…] empower your family. I’ve been an advocate of social change in the areas of financial literacy, diversity and inclusion, domestic violence, and access to proper nutrition and healthcare, and many other social topics I […]

This is so inspiring!

Thanks for sharing some of your stories and experience. Racism and discrimination must stop all at once.

Racism is everywhere and there is no need for it. So sad this happened to you!