According to ancient eastern philosophy there are four cardinal rules for living and the first is having reverence for all life. But there’s a tiny, six-legged winged insect the size of a sesame seed and feeds on human blood about five times in a twenty-four hour period that I just can’t bring myself to feel reverence for… Have you guessed what I’m talking about? Is your head itchy yet? I’m talking about creepy, crawly, cringy, icky, nasty, yucky head lice.

I grew up in a slum, so it was inevitable to get head lice. With two young siblings and a lot of coarse, curly hair, the infestation was never ending… and quite disgusting. Besides the itchy, irritable, hurting scalp, you feel so much shame when you get head lice. “Piojosa” is one of the worst insults anyone could ever call you, piojos (lice) are a plague that makes you feel dirty – even though cleanliness has nothing to do with it. Piojos actually love a clean scalp.

According to Merriam Webster’s, the definition of shame for English Language Learners is “a feeling of guilt, regret, or sadness that you have because you know you have done something wrong. : ability to feel guilt, regret, or embarrassment. : dishonor or disgrace.” 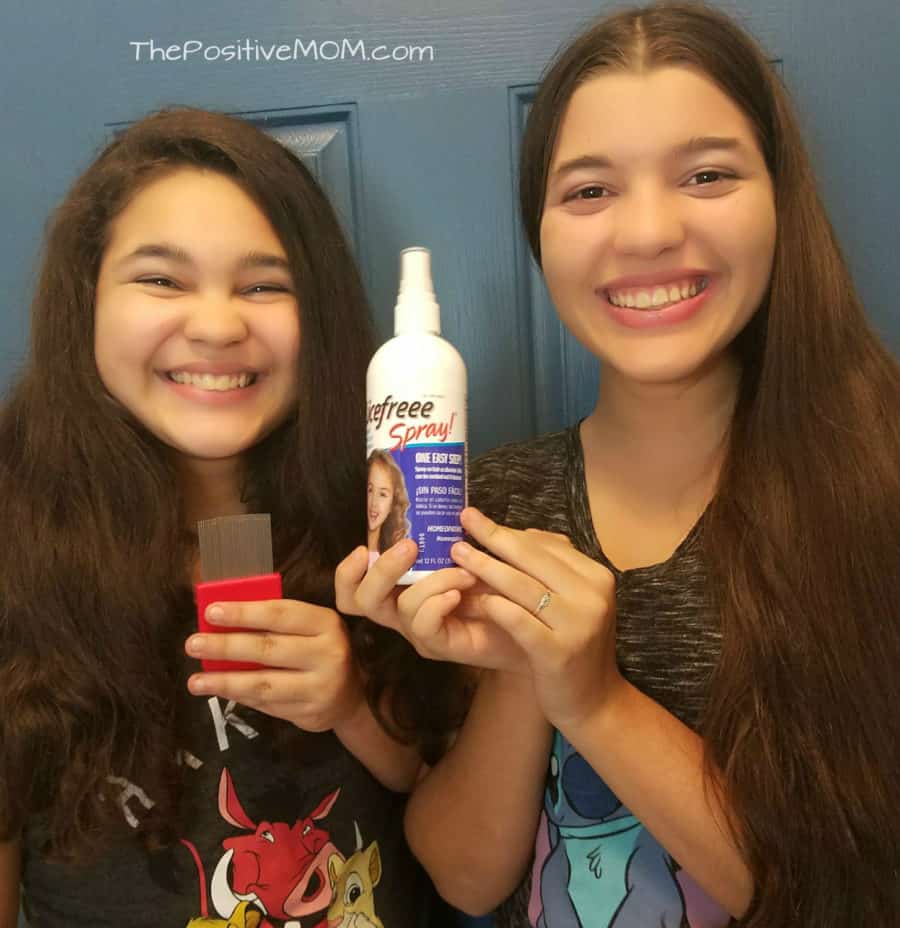 But getting head lice is not a result of wrongdoing. It’s not mom’s fault, it’s not the child’s fault. Just like a cold, one person gets it from a person who got it from another. But not everyone knows that and the stigma around piojos is as real today as it was when I was a child.

It wasn’t enough that I had bugs crawling in my head, behind my ears, and around my neckline sucking my blood, I was also isolated at school as if I was dangerous, and was harshly punished at home as if I picked up the piojos on purpose.

The treatments were horrible. I got a double headache: one from my hair being pulled violently because I didn’t sit still for what seemed like an eternity, and another from the toxic hazardous substances that were used in my head. One of the “most effective” treatments was insect poison! I really can’t even comprehend how I can still function.

Naturally, (pun intended), I would never pour poison on my daughters’ beautiful head full of hair.

And because they went to a private school, there would be the occasional note that an infestation was suspected and they took the necessary step to prevent the kids from getting lice, so thankfully, we only got false alarms and many judged the “neglectful parent.” Then I started to homeschool my daughters, so the probability of getting head lice was really slim. Lice don’t jump or fly, so lice get in your scalp through sharing personal items like brushes, hats, coats, etc.

A lice free childhood? Think again! When I got remarried, we used to have my stepdaughter over and the infestation began. I was going through a difficult pregnancy when it happened, almost unable to get out of bed and sick all day long. These nasty little monsters caught me off guard and at the worst time!

We spent a small fortune treating the girls with over the counter shampoos and spent endless hours inspecting scalps and combing through so much hair. When it seemed that we had it under control, that’s when it grew unmanageable!

And then they got to me! I could no longer use the shampoo because it wasn’t completely homeopathic and I was afraid it could hurt my baby. We tried EVERYTHING.

and so much more!

Each of these processes were long, painful, and uncomfortable – and none of them worked!

I was desperate and terrified. My scalp was peeling, my hair was falling off, and my patience was wearing off. We were all depressed because we couldn’t find a real solution to protect us against catching them again.

I gave up washing recently worn clothing, linens, towels, bedding, stuffed animals, jackets, … and vacuuming the carpet with no energy whatsoever. It was a time-consuming process… and it all felt like a hopeless waste of time! Piojos were everywhere … you could pick them off your hair and they’d just fall on your forehead or shoulder, casually, mockingly. The piojos took over my life. Ugh… nauseous!

I thought about chopping all our hair off in more than one occasion, but that wasn’t an option, because then we’d have to say why. And we didn’t want to. We felt dirty. Ashamed. Powerless. LICE is a four-letter-word. I remember if I ever bought any treatment I would hide it in case we ran into someone, and my heart about stopped in front of the cashier, hoping she would never recognize you if she saw you again. Soon enough, Taylor Bare started doing the regular trips, so I didn’t have to go through the anxiety.

Whenever it was just us in the house, we would get the infestation under control, but then we were exposed again and sharing a room in a very small space didn’t help. I tried to remain calm and not act alarmed, but the fear started to take over me.

After Eliana was born, I kept my mind focused on her and the piojo situation didn’t haunt me as much. But then it happened: there was a huge gross louse in her beautiful newborn head, surrounded by a bunch of nasty nits and nymphs. I was so shocked, stressed and upset! 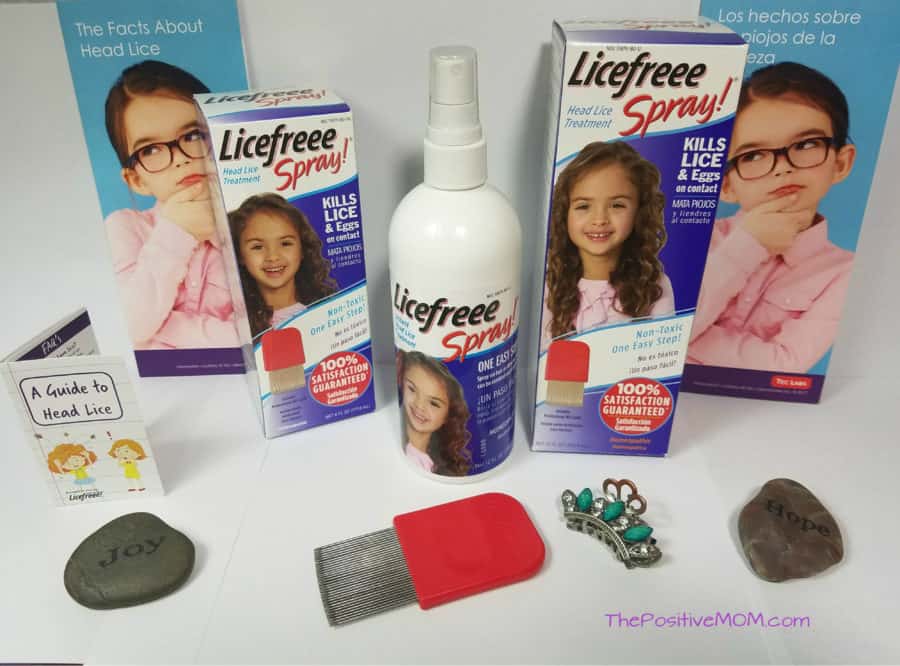 Since I had a bit more energy to take matters in my own hands, I gave up the essential oils and kitchen mixes and went hunting for homeopathic solution that would get rid of the little vampires once and for all. Enter Licefreee!

Licefreee turned out to be a safe and fast-acting solution to our piojo problems. I was so relieved when we started feeling like we were finally lice free for real, even with the constant exposure. With a clear head (literally), I started to ponder on what caused the lice shaming in the first place. It all went back to my dysfunctional childhood and the feeling of being an undesirable, guilty, singled out piojosa… It had nothing to do with what was happening today.

As we start to question the myths, misconceptions, misinformation, and heated feelings around an issue, and as we start to arm ourselves with real facts, we are empowered to find solutions – and peace of mind. The truth is there is no shame in having head lice, it is so common that the Center for Disease Control & Prevention (CDC) estimates around 12 million cases of lice each year!

Instead of shaming and blaming ourselves (or even others), we can talk openly about it and spread the word on prevention and treatment. I am late to the party because it’s been four long years since we became lice free, but it took me that long to convince my children that this story needed to be told. I am so grateful for the opportunity to partner with Licefreee, because they saw it as a sign that it was time.

Licefreee is a non-toxic, homeopathic head lice treatment that effectively kills head lice and eggs (nits) on all hair types including thick, curly hair like ours. Thankfully, the Licefreee remedies are safe for an infant and strong enough for adults, because we were all infested – yeah, even Taylor Bare – and his were lighter! LOL

The Licefreee treatments were created by parents for parents as a wonderful alternative to traditional chemical pesticide remedies that claim to get rid of lice. They all contain a professional, stainless-steel nit comb that really works!

There is so much trauma and so many paradigms from my childhood that I am still working through, and though I’m still scratching my head and faintly listening to the sound of squeezing, cracking, and popping of lice guts, as I write this to you, I think I may have found something to appreciate piojos for. Maybe my reverence for their blood-sucking ways has yet to emerge, but I do cherish that through these stigmatized bugs I have found the freedom to fight shame, to break taboos, and to empower my daughters to do the same.

Anyone can get lice – these creatures don’t discriminate. A lice outbreak doesn’t have an embarrassing meaning or cause, and seclusion nor panic are the answer. I now keep a bottle of Licefreee! in my bathroom cabinet, just in case! Though it seems we’ve won the battle, I won’t rest on my laurels and will keep a watchful eye.

Do you have a lice story to share? If you’ve ever been frustrated about lice, or tried ridiculous lice treatments, I invite you to open up about the drama and trauma of lice shaming in the comments below!

I remember years ago my mother constantly washing our hair with teatree smelling products or some concoction with tea tree oil as that was the home remedy back then!

Lice is just horrible. I remember my early childhood days of having them everywhere. I appreciate products that really work to prevent them from at least getting to you or inside your home.

I've never dealt with lice (thankfully!) but this product sounds amazing. If it's safe for a newborn, I know it's ok for everyone!

I totally feel you on this. I've always had hair down to my waist. It's not just the slums that get lice though. When I was very young, I lived in a trailer park in Southern Alabama. Obviously, not wealthy - and I have long, straight hair. The lice epidemic was so bad that they shut the school down for 2 weeks. All the kids had it - even the kids on the other side of the tracks - not just us trailer park kids. My mom did end up having to crop my hair.