Why You Need To Say NO More Often

Do you have difficulty saying “NO”? I struggled fearing this word most of my life and choked on these two little letters because my belief was that they meant rejection. I thought “NO” meant I wasn’t going to get what I wanted. It meant I wasn’t important, valued, liked, or loved. And, like the old Golden Rule teaches, you don’t do to others what you don’t want done to yourself… which explains why I developed a strong desire to say YES, in an effort to not seem like a “bad person.”

Why do I say YES when I really want to say NO?

I think it’s a woman thing… and especially a mom thing to be compelled to say YES all the time, to everything, and to everyone. Girls are usually raised to be “nice,” while most boys are raised to be strong and assertive. “NICE” could be a synonym of polite, but it can be a synonym for doormat, too. 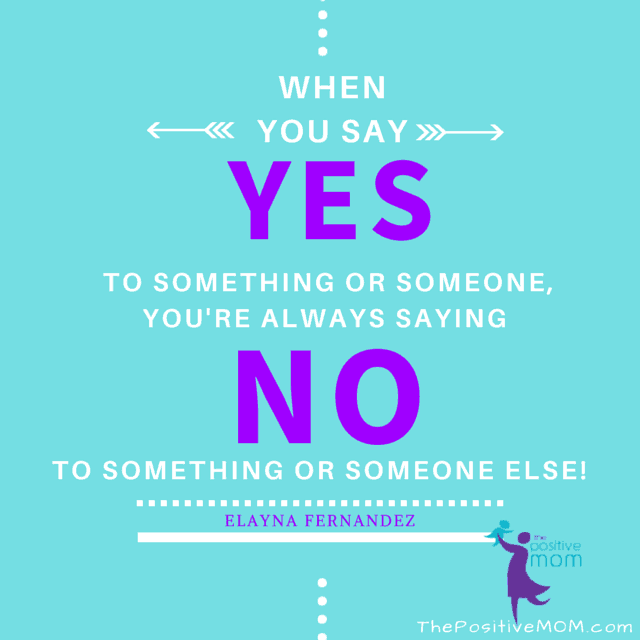 Every YES is a choice and sometimes, it is not a healthy one:

[Tweet “Have trouble saying ‘NO’? Learn about the YES cycle and empower yourself! #motivationformoms”]

In my experience, here’s what the YES cycle often looks like: You say YES to something even though you know you’re taking on too much. You spread yourself too thin, which causes you emotional burden because you’re dreading it all along. This slows down your productivity, which causes you to hardly get anything done, or do late-low-quality work, not to mention you put off what you really needed to do. Of course, you end up doing it because you said you would, which causes you feel resentment toward yourself because “you should have known better,” and sometimes even toward the person who asked, because “shouldn’t they know better, as well?”  Yes, you are feeling overwhelmed, resentful, stressed, and guilty… and everyone ends up frustrated. 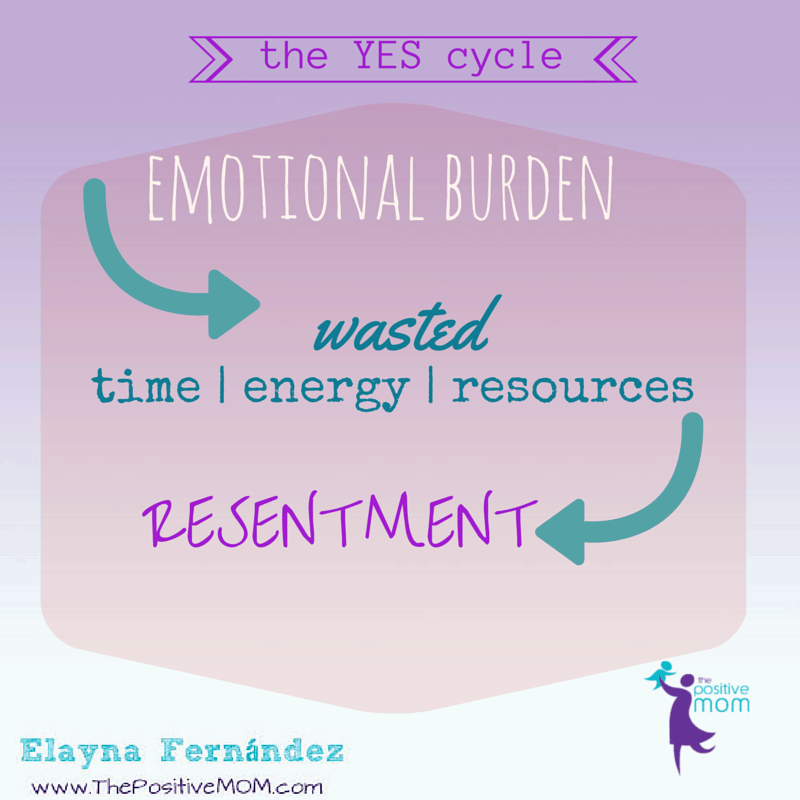 This is why I’m now a practitioner [and an advocate] of saying NO – and I invite you to be one, too – for the sake of your time, your wallet, your relationships, your goals, and your sanity. Learning to say NO is an extremely powerful skill, and as women, moms, and mompreneurs, we need to say NO more often, and we need to get better at it, too.

What do you need to say NO to?

Here’s a list of possible declarations that have helped me and many of my coaching clients and may help you overcome the disease to please and get you started on the path to saying NO to what doesn’t serve you or keeps you stuck:

How Can You Learn to Say NO More Often?

It’s really simple, yet not at all easy to do: we say NO more often when we deliberately, consciously, and intentionally think through our NO. Never say YES if it doesn’t feel right!

Be clear on your priorities: Saying NO more often allows me to say YES to what matters to me. I still serve, help, contribute but it’s out of generosity, not icky self-imposed obligation.

Don’t Apologize: It’s actually selfish to say YES when you want to say NO, (See the YES Cycle above) so no need to act or feel guilty, because you are doing what is best for everyone involved.

Practice Saying NO:  Take a deep breath and say it with me: NO.

That IS a complete sentence, you know!  You can say NO without explaining yourself. 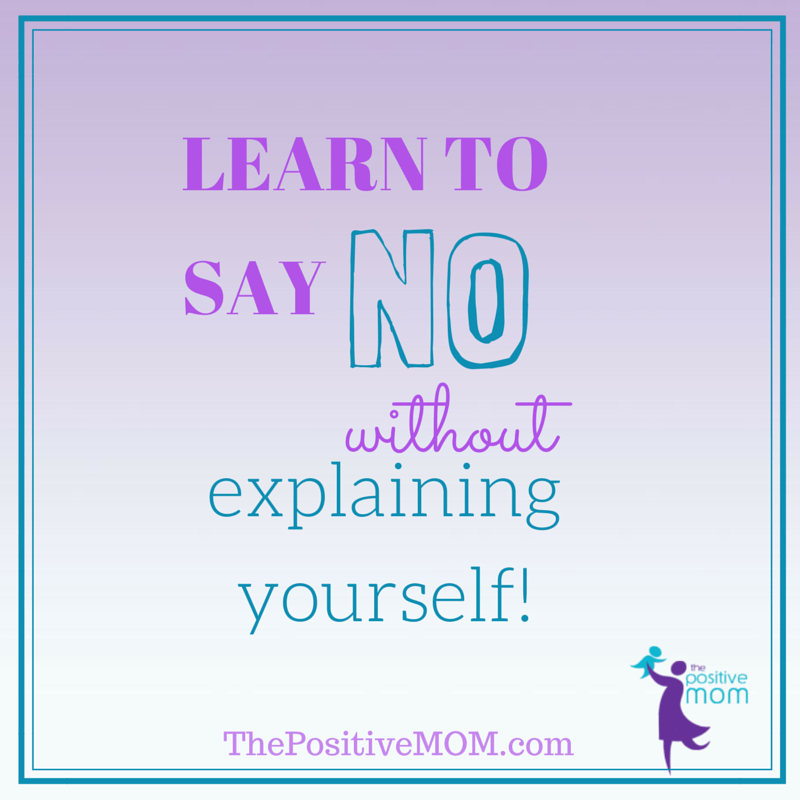 It’s Okay To Say NO!

You know the old fear of “NO”? I’ve learned to see it for the lie that it was. Now when someone says NO, I choose to not feel rejected, disliked, or unappreciated. I choose to admire that they are honoring themselves and prioritizing what matters. I choose to learn from them.

[Tweet “Learn to say NO without explaining yourself! #motivationformoms”]

When I finally chose to only work with moms, or to include my faith openly in all my writing, or to be more vulnerable about my feelings, there were all times in which many people said NO to being my follower, my subscriber, or my online friend. These were also the times in which I started getting the most meaningful feedback, and attracting people to whom my words make a difference. When someone unfriends, unfollows, or unsubscribes, they are respecting me – and themselves… no waste!

And the fear that saying NO would lead to hurting other people’s feelings; turns out most of the time, their feelings are just fine and I have to just laugh at my creative imagination, admitting I watched too many telenovelas as a kid. Most people are actually very understanding, and end up admiring you for having a plan, having boundaries, and having a vision, for being someone who is focused on your priorities, who stays true to yourself, and is a wise steward of your God-given gifts. 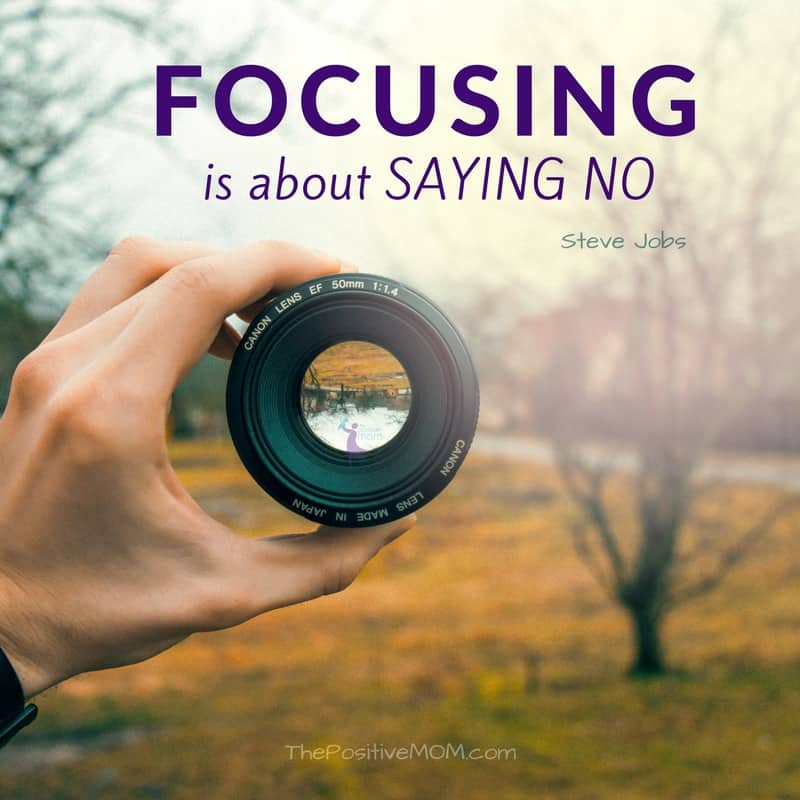 If you are not good at saying NO yet, don’t beat yourself up. I believe everyone who seems good at saying their NO’s learned it the hard [and slow] way, like I have.

And it’s a lifelong journey. You will want to say YES, and I am tempted [and fall for it] more often than I want to admit; but this isn’t about what you and I want. It’s about what we need.  And sometimes you need to say NO. Imagine if you said YES to every telemarketer you ever spoke to. LOL. Exactly.

Saying NO is a relief. No more over-commitment, no more exhaustion, no more icky-ness, no more regrets and no more guilt… just self-awareness, self-discipline, and self-forgiveness.

Are you committed to saying NO more often and make “NO” your friend? Tell me how! 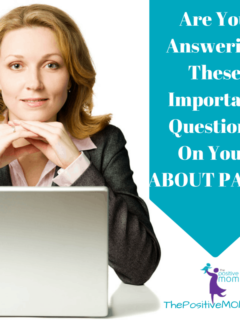 Previous
Are You Answering These Important Questions On Your About Page? 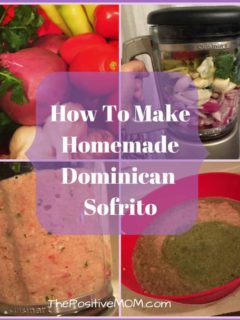 Next
The Secret To My Easy Vegan Recipes: How To Make Dominican Sofrito
Click here to cancel reply.

10 Things Your Daughter Needs To Hear From You

[…] think NO can be an empowering word when we use it to set boundaries, and, of course, when you’re teaching your littles to stay […]

It's Time To Learn How To Secure Your Financial Future ~ #OwnYourFuture

[…] benefits. It’s not that I forever gave up on chores, but it is important to prioritize, know when to say NO, and when delegation is […]

Raise Your Standards and Improve The Quality Of Your Life

[…] lesson that LESS IS MORE… and it is SO worth it, as there’s much at stake. Saying NO is a skill that we must all develop in order to live a life we […]

Simple Ways To Harness The Power Of Positive Thinking

[…] you must be willing to be a little uncomfortable because you’ll need to say NO a lot more than before, but that’s a nominal price to pay for elevated self-image, sense of […]

[…] be affectionate, to give from the heart, to show love and care, we can also teach them to say NO in a respectful way, when displaying physical affection doesn’t feel right to […]