Tears were rolling down my face and I let out an ugly cry. It felt safe. I was in a room filled with thousands of hardcore Disney fans who got me. The Pride Rock scene from 1994 animated classic The Lion King always gets to me… and a LIVE reenactment at the D23 Expo just stirred all kinds of feelings in me.

Rafiki holding Simba in the anointing ceremony, as everyone rejoices with pride and joy for the potential of a new life is what inspired my logo for The Positive MOM. 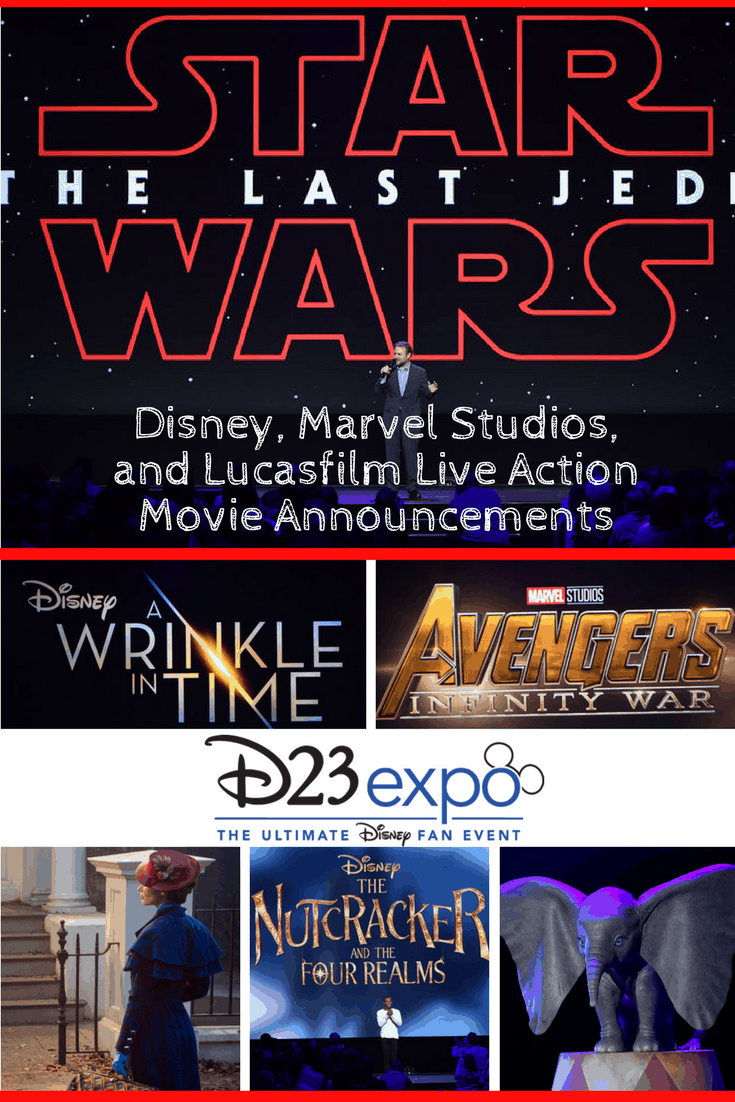 Among sobs, the iconic music of “The Circle of Life” playing, I was sure no one was more excited about the announcement: Disney unveiled that The Lion King live-action film would be part of the movie slate, and would roar into theaters everywhere on July 19th, 2019! 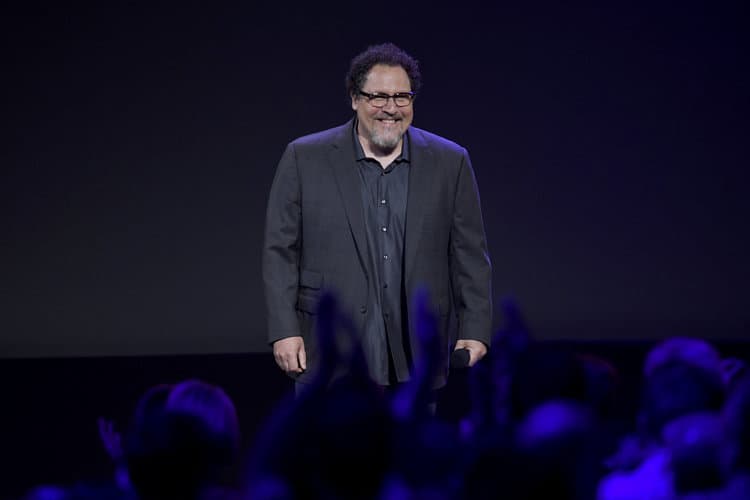 Favreau amazed the crowd speaking about the promising all-new filmmaking techniques that will deliver striking visuals never before seen on the big screen—bringing celebrated characters to life in a whole new way. After getting a taste of what the movie will look like, I seriously cannot wait!

But let me back up a bit. The Disney, Marvel Studios & Lucasfilm Live Action Panel was two hours! Each minute of it was filled with unexpected surprises, shocking announcements, and unbelievable star appearances. The passion and enthusiasm were palpable in the Anaheim Convention Center.

“We feel like our fans are a part of the family, and the D23 Expo is our chance to give a little something extra back to them,” said Alan Horn, Chairman, The Walt Disney Studios, when welcoming the fans. They didn’t under promise, yet they definitely over-delivered. Everyone was ecstatic… including me.

Sean Bailey, President of Walt Disney Studios Motion Picture Production gave us an overview at the Disney live-action slate, writer/director Rian Johnson for a look at Lucasfilm’s upcoming film (The Last Jedi), and the event closed with Kevin Feige, President of Marvel Studios, with all the news about Avengers Infinity War.

It’s a good weekend when you see Oprah, not once, but twice! When Sean Bailey called the cast members of A Wrinkle In Time to the D23 Expo stage, along with visionary director Ava DuVernay, the audience went wild. Reese Witherspoon, Mindy Kaling, Chris Pine, and newcomer Storm Reid showed a great chemistry and camaraderie together, enticing us to embark on this epic adventure with them, which is based on Madeleine L’Engle’s timeless classic, A Wrinkle In Time. My daughters and I are starting to read the novel in preparation for the movie, which opens in theaters everywhere on March 9th, 2018! 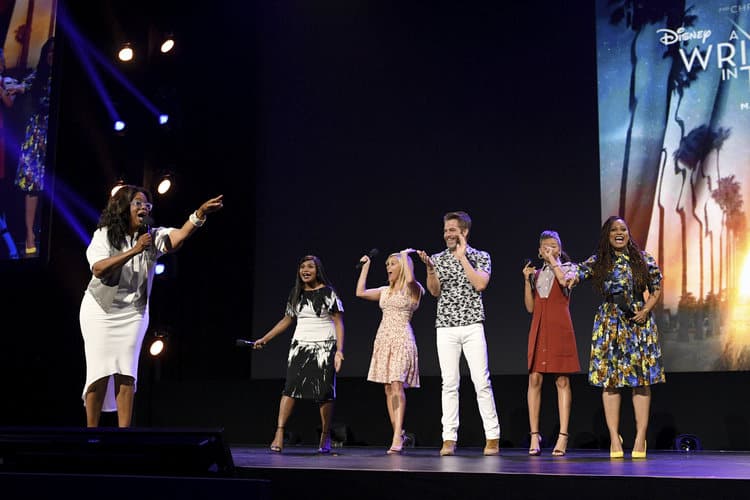 D23 Expo attendees were the first audience to enjoy the film’s teaser trailer! Then something amazing happened: Oprah gave me a teaser poster for A Wrinkle In Time. She turned to all of us, adapting her signature line for the occasion:

And we did! The rest of the cast were so cute, especially Reese Witherspoon. I seriously think her and I could be BFFs. 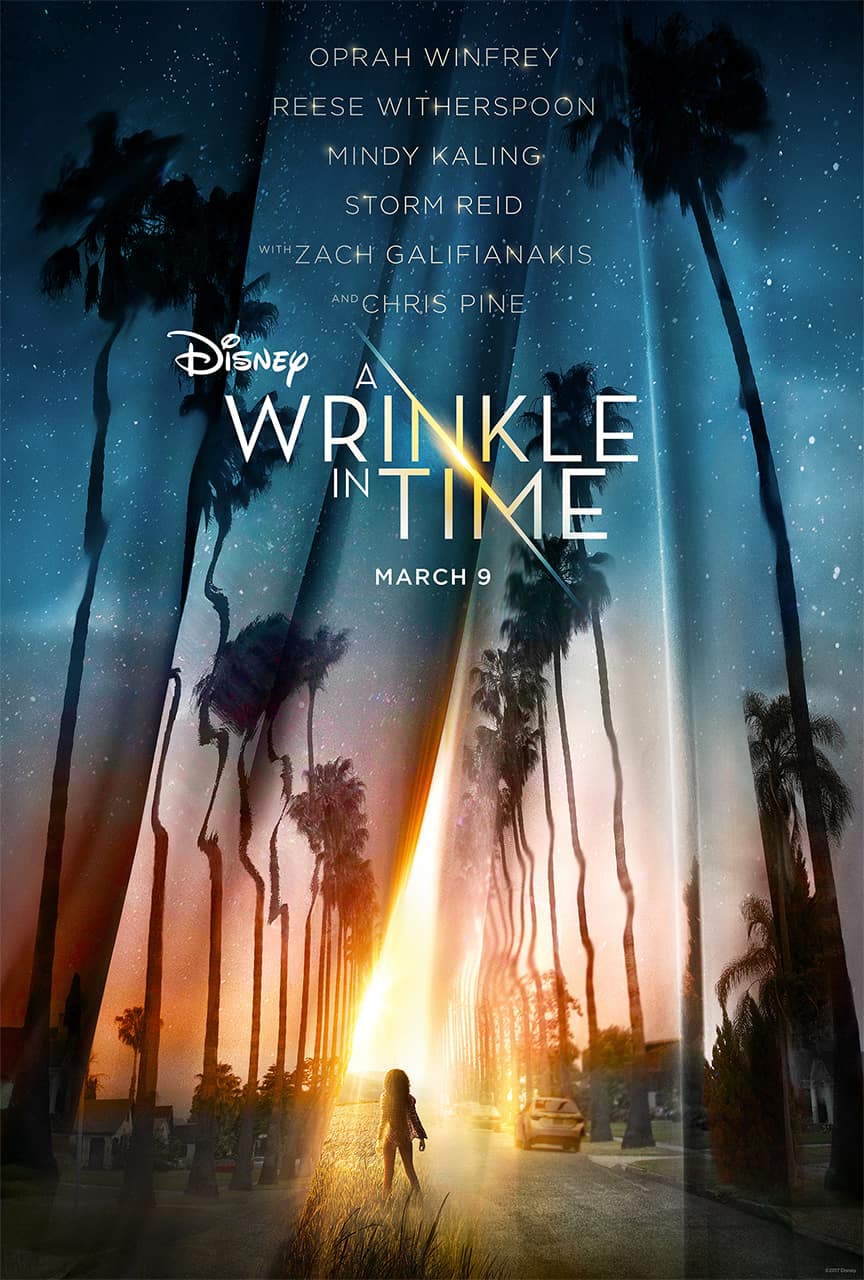 A Wrinkle In Time will take you across dimensions of time and space, examining the nature of darkness versus light and ultimately, the triumph of love!

We said goodbye to Oprah and hello to Lil Buck. A fun fact you may have seen on my feed as I live-tweeted from the Disney, Marvel Studios & Lucasfilm Live Action panel is that “The Mouse King is made up of thousands of mice—a cutting-edge CG creation.” But we wanted him to move in a way that would be wonderfully surprising and incredibly cool, so we called on Lil Buck to provide the style of dance that defines the character. He is so talented and the way he makes this character move is unbelievable.” 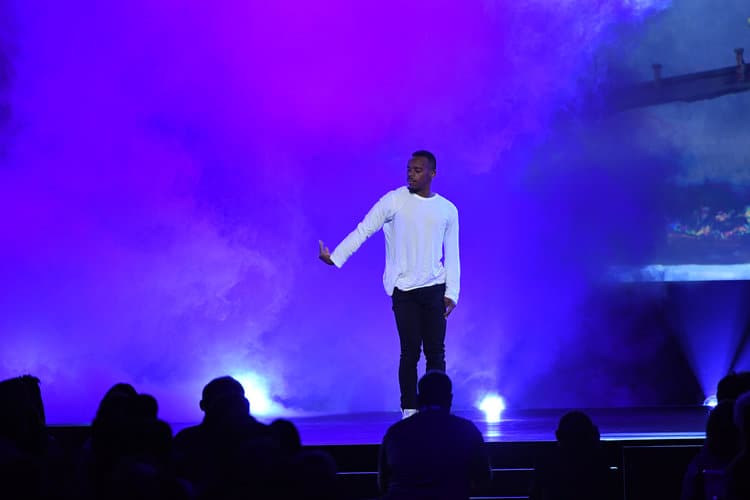 A fun fact you may have seen on my feed as I live-tweeted from the Disney, Marvel Studios & Lucasfilm Live Action panel is that “The Mouse King is made up of thousands of mice—a cutting-edge CG creation,” said Sean Bailey, “But we wanted him to move in a way that would be wonderfully surprising and incredibly cool, so we called on Lil Buck to provide the style of dance that defines the character. He is so talented and the way he makes this character move is unbelievable.”

A standing ovation followed Lil Buck’s performance. I was not familiar with this extraordinary Los Angeles-based dancer but was impressed with his talent and grace on the D23 Expo stage to celebrate The Nutcracker and The Four Realms coming to theaters November 2nd, 2018! November is going to be a great month! 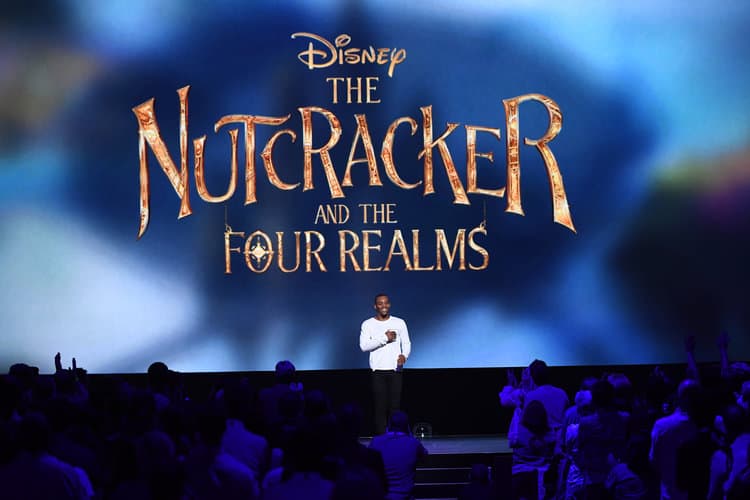 The Nutcracker and The Four Realms largely takes place in a strange and mysterious parallel world—home to Land of Snowflakes, Land of Flowers and Land of Sweets. But it’s the ominous Fourth Realm where Clara must take on a tyrant called Mother Ginger as well as a gang of mice who’ve stolen a coveted key from Clara. Disney’s all-new take on this classic story will be directed by Lasse Hallström and produced by Mark Gordon and Larry Franco, and starring Keira Knightley as the Sugar Plum Fairy, newcomer Mackenzie Foy as Clara, Helen Mirren as Mother Ginger, Morgan Freeman as godfather Drosselmeyer, and featuring a special performance by Misty Copeland, the movie is inspired by E.T.A. Hoffmann’s classic tale. 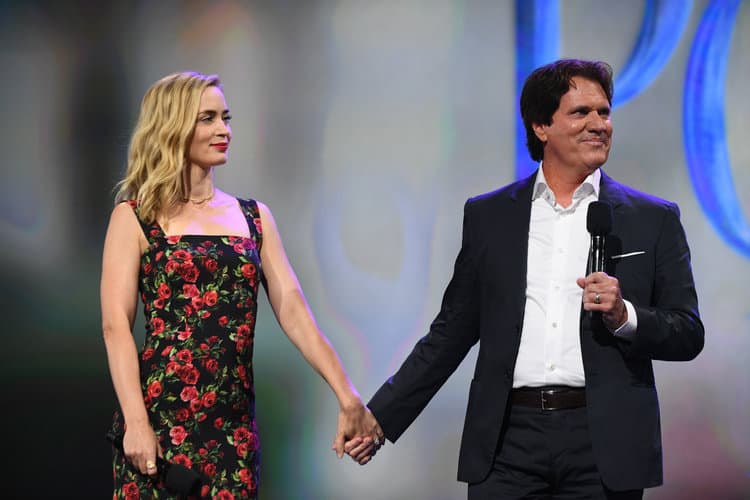 Then it was the time I had long awaited! The time when Mary Poppins Returns! Emily Blunt took the stage with director/producer Rob Marshall. It was practically perfect in every way. She said she’s going to do Mary Poppins “her way,” and I cannot wait to see! Of course, my most favorite part of this original musical sequel to the 1964 “Mary Poppins,” is Mary’s friend Jack, the optimistic street lamplighter, will be played by – DRUMROLL, PLEASE – our orgullo Latino, Lin-Manuel Miranda! 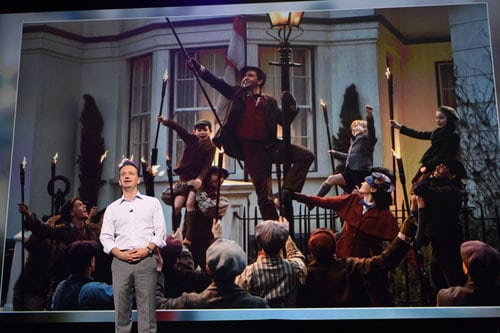 “And we were very loyal to the books,” Rob Marshall assured, and let us know that Mary Poppins Returns will be “a brand-new original film musical from top to bottom.” So we can count on Mary Poppins to help the Banks family find the joy and wonder missing in their lives once again… and maybe yours and mine, too!

It got even more surreal as we were treated to an exclusive first look at the film, which was accompanied by a live orchestra performing original new music from the film conducted by composer Marc Shaiman. Seeing Lin-Manuel Miranda elicited many more screams than I had anticipated coming out of my mouth – probably why my throat is still sore and my voice is still scruffy. 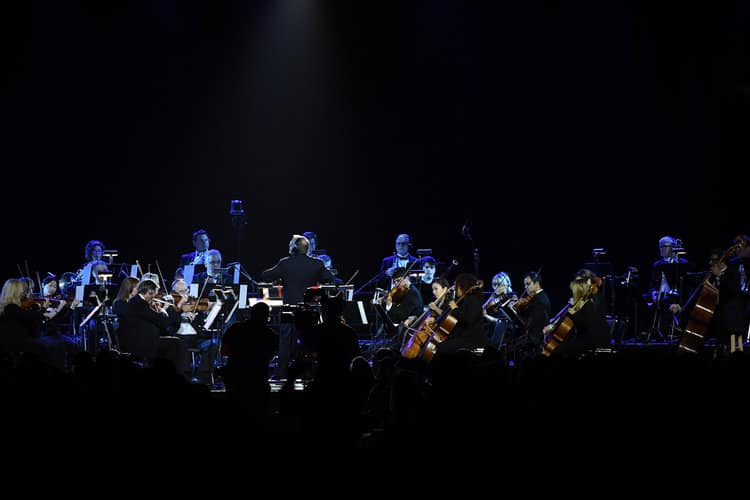 Mary Poppins Returns is directed by Rob Marshall. The screenplay is by David Magee and the screen story is by Magee & Marshall & John DeLuca based on The Mary Poppins Stories by P.L. Travers. The producers are Marshall, DeLuca and Marc Platt with Callum McDougall serving as executive producer, and the music is by Marc Shaiman with songs by Shaiman and Scott Wittman.

A fun fact I tweeted out is that Dick Van Dyke confessed that he felt “the same level of joy” on the set as he did in the first installment of Mary Poppins. Can you imagine the goosebumps?  Mary Poppins Returns opens in theaters everywhere on December 25th, 2018! Best Christmas gift ever! (Insert WINK here). 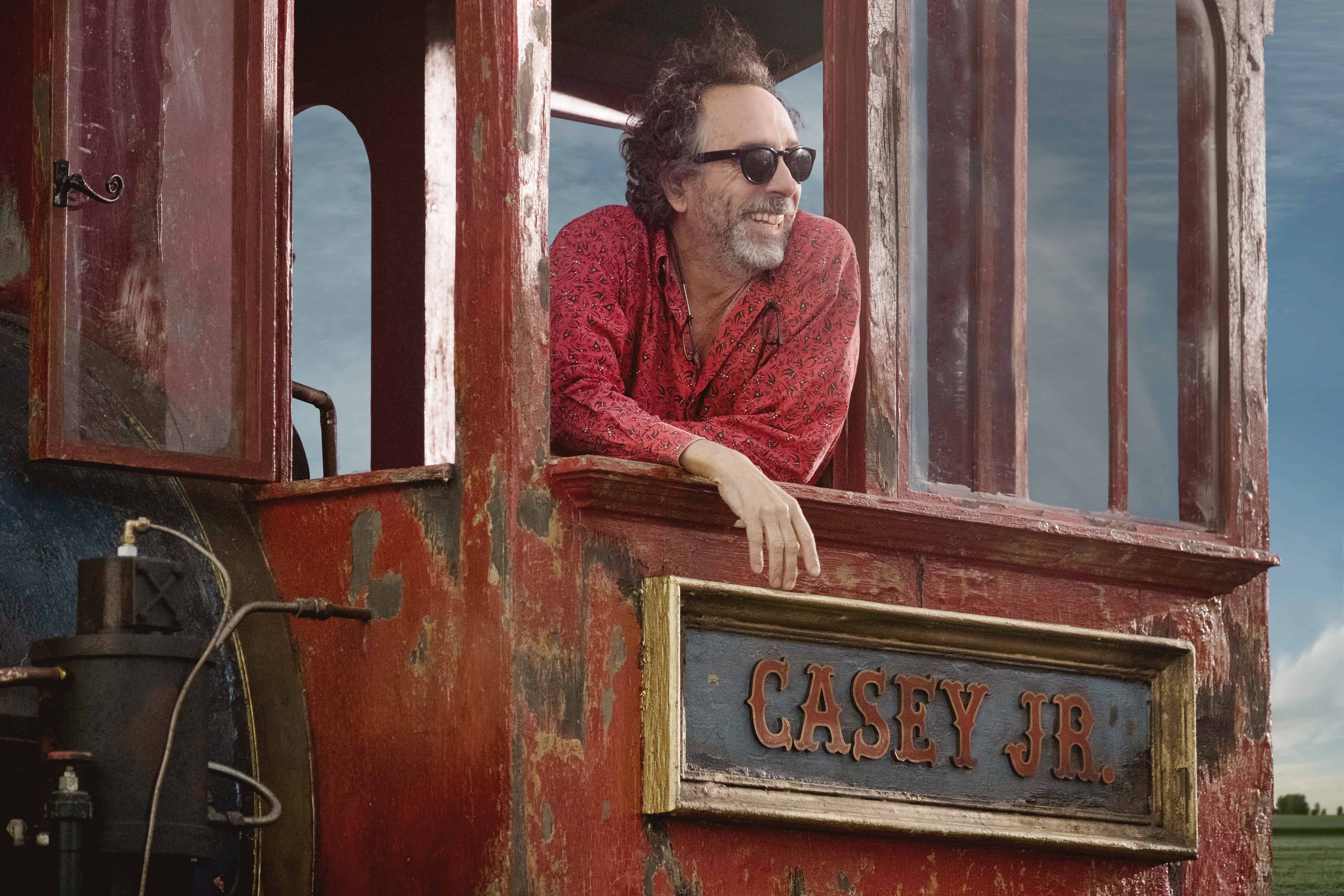 And if that wasn’t enough, we understood Walt Disney’s philosophy on how it’s kind of fun to do the impossible.” Did you ever think there would be such a thing as a Dumbo live action movie?

Visionary filmmaker Tim Burton himself confirmed it to the D23 Expo audience! He is working on a live-action reimagining of Disney’s 1941 animated classic Dumbo. “’Dumbo’ was always one of my favorite Disney films,” said Burton. “We’re trying to give it the same heart, feeling, and emotion that we all loved about the original.”

Soon enough, we found out the Dumbo live-action would have many times the amount of cuteness as it flies into theaters everywhere on March 29th, 2019. Sean Bailey brought an actual size maquette of Dumbo as he will appear in the film. Dumbo is utilizing state-of-the-art visual effects to portray the big-eared elephant and many of his animal counterparts. 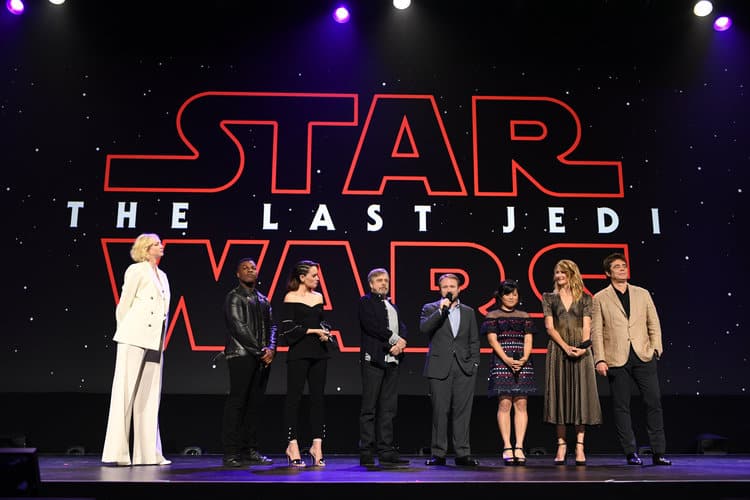 Rian Johnson took the stage for one of the most anticipated segments of D23 Expo. The writer and director of the latest chapter in the Skywalker saga, Star Wars: The Last Jedi thrilled the audience by introducing talent from the film, including Mark Hamill, Daisy Ridley, John Boyega, Gwendoline Christie, Kelly Marie Tran, Laura Dern and Benicio Del Toro. D23 Expo fans were brought to their feet for a standing ovation – screams and chills abounded.

We were then treated to a special sneak peek of behind-the-scenes footage from the highly anticipated Star Wars movie:

In Lucasfilm’s Star Wars: The Last Jedi the Skywalker saga continues as the heroes of The Force Awakensjoin the galactic legends in an epic adventure that unlocks age-old mysteries of the Force and shocking revelations of the past.

“It’s about family. And that’s what’s so powerful about it.” ~ Carrie Fisher

Star Wars: The Last Jedi opens in theaters everywhere on December 15th – a day before my birthday! 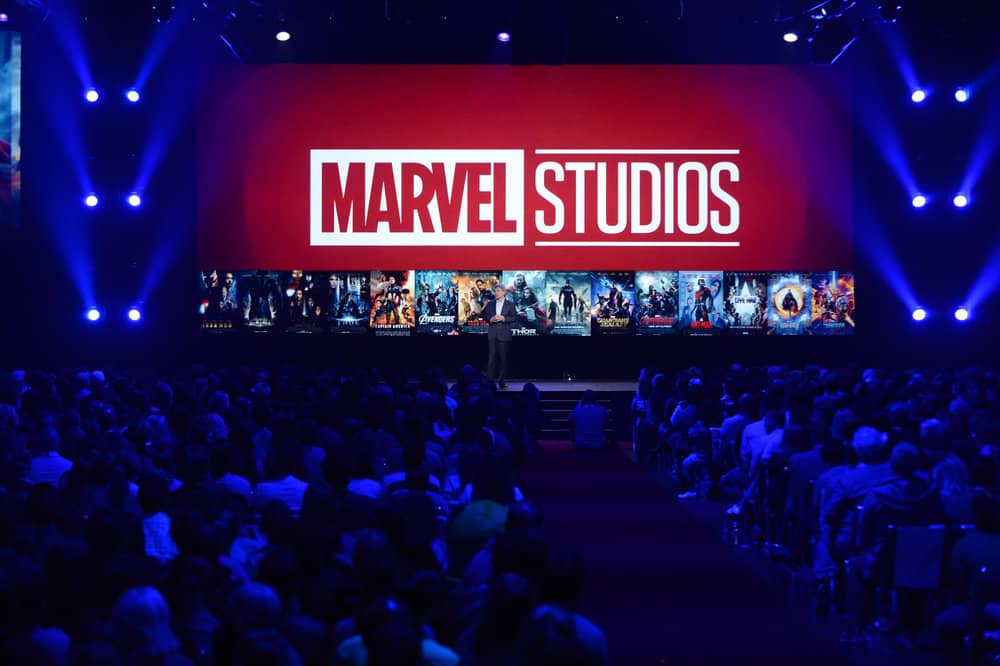 It was time for the big finale… and I mean BIG. Kevin Feige to the stage for Marvel Studios’ Avengers: Infinity War and no one at D23 Expo was ready for what was about to come! Feige unveiled the Marvel Studios’ official 10th-anniversary logo. In celebration of the anniversary, Marvel Studio fans can expect exclusive consumer products and collectibles, along with in-theater events and much more in the coming months. 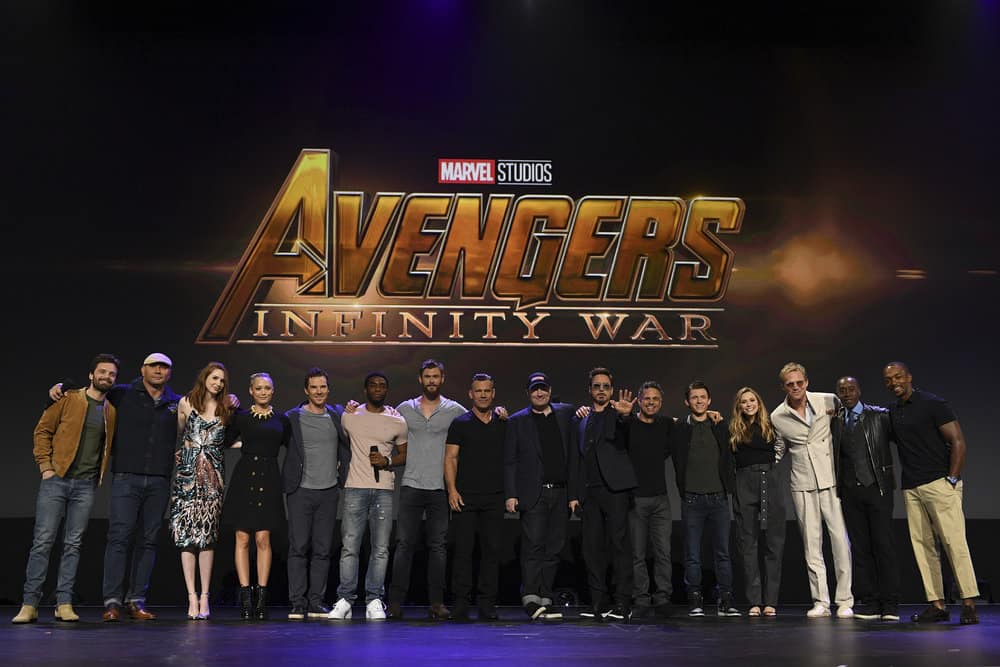 Avengers: Infinity War is “the biggest production in the Marvel Cinematic Universe.”

Marvel Studios’ Avengers: Infinity War brings to the screen the ultimate, deadliest showdown of all time. The Avengers and their Super Hero allies must be willing to sacrifice all in an attempt to defeat the powerful Thanos before his blitz of devastation and ruin puts an end to the universe. Avengers: Infinity War opens in theaters everywhere on May 4th, 2018! 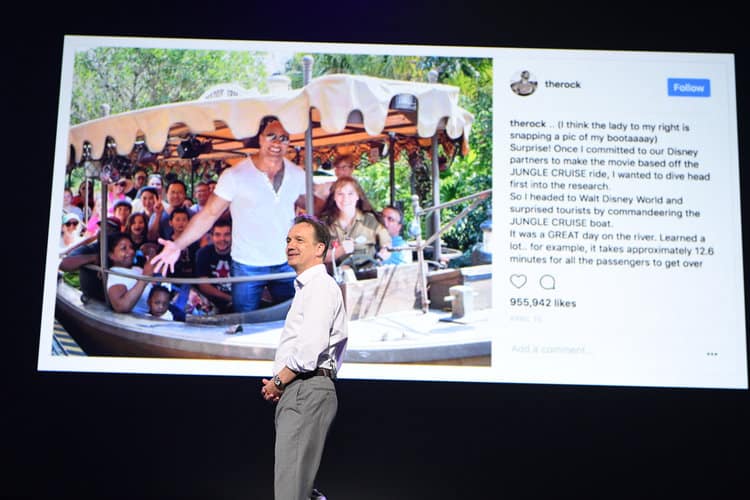 D23 Expo fans also rejoiced in the announcement of a live-action Aladdin, directed by Guy Ritchie and starring Mena Massoud as Aladdin, Naomi Scott as Jasmine, and Will Smith as the Genie. This live-action take on Disney’s 1998 feature, which will be helmed by Niki Caro (“McFarland, USA,” “Whale Rider”).

One bonus announcement we didn’t know about until the next day after the D23 Expo Walt Disney Disney Studios, Marvel Studios & Lucasfilm Live-Action panel. It’s a princess movie… What is it called, again? Oh right, The Little Mermaid! You heard right! 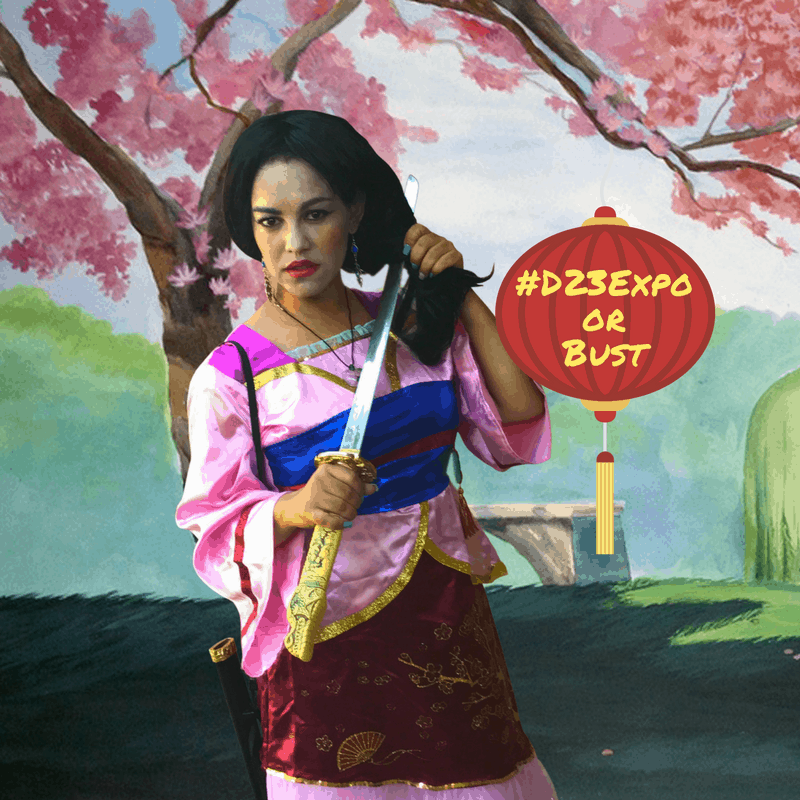 And, speaking of princesses, Disney really made my day when Mulan was confirmed. The live-action take on Disney’s 1998 feature, which will be helmed by Niki Caro (“McFarland, USA,” “Whale Rider”). Mulan is my “spirit princess” and the Disney Princesses team agrees. I cannot wait to see her on the big screen, knowing her story is so much like my life story: a warrior princess!

Which Walt Disney Studios film are you most looking forward to? Which appearance for The Last Jedi and Avengers: Infinity War was most impressive to you?

Stay tuned for all things D23 Expo as I share my adventures with you, and be sure to follow using #D23Expo #DuckTales #SummerofHeroes #Disneyland and #TheLionKing. 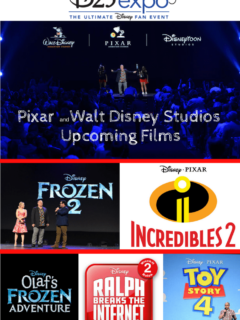 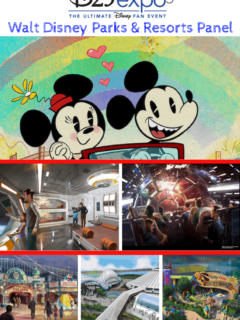 Next
D23 Expo Recap: Experiences and Attractions Coming to Disney Parks Around the Globe
Click here to cancel reply.

Finding Your Place In The Galaxy [ #GotGVol2 Blu-ray / Digital HD ]

[…] favorite moment of the  D23 Expo was getting to watch an exclusive sequence of the upcoming The Lion King live action movie remake, especially since it’s being directed by the amazing Jon Favreau. I love all things Disney, but I […]