What’s your favorite animated Disney movie? That’s such a hard question, right? When it comes to Disney movies, it’s so hard to commit, isn’t it? I get it. But when I think of a movie that has shaped my life and that I continue to draw inspiration from, I have to say it’s The Lion King. In fact, when I thought of a visual to represent what The Positive MOM brand, I chose to design a logo that represented the epic moment where Rafiki presents Simba to the pride. 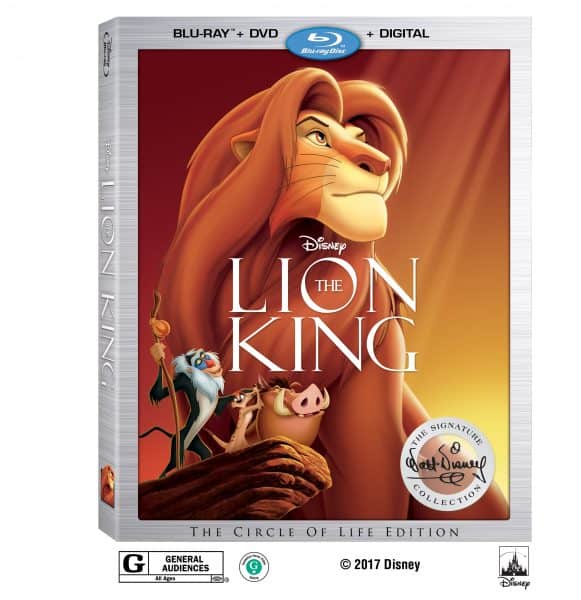 “The Lion King” follows the adventures of Simba, a feisty lion cub who cannot wait to be king, as he searches for his destiny in the great “Circle of Life.” The film earned a Golden Globe® for Best Motion Picture—Comedy or Musical and inspired a Tony Award®-winning Broadway musical that is currently the third longest-running musical in Broadway history.

Every moment in The Lion King has significant meaning and purpose, and there about 89 minutes of valuable lessons we can learn as moms, as well as so many we can teach our children. It’s so exciting that today, August 29, the The Lion King roars to Its rightful place in the Walt Disney Signature Collection on Blu-ray™! 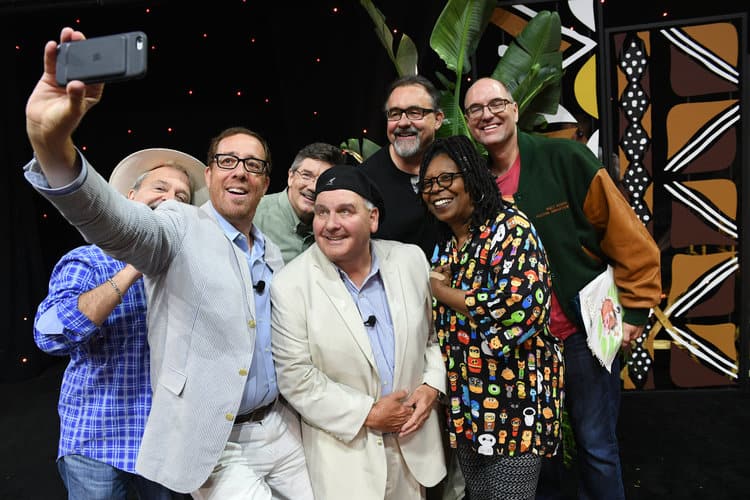 I learned so much about how the movie was made (and almost didn’t get made!) on The Lion King panel, the last day of D23 Expo, where executive producer Don Hahn, co-director Rob Minkoff, Mark Henn (Supervising Animator “Young Simba”), Tony Bancroft (Supervising Animator “Pumbaa”), Ernie Sabella (voice of Pumbaa), Jim Cummings (voice of Ed the Hyena), and new Disney Legend Whoopie Goldberg (voice of Shenzi) shared their favorite anecdotes and stories.

The Lion King is definitely one of the biggest animated films in history, with the most heart and classic humor. It’s a masterpiece that has stood the test of time.

“Remember who you are!” ~ Mufasa  (James Earl Jones) 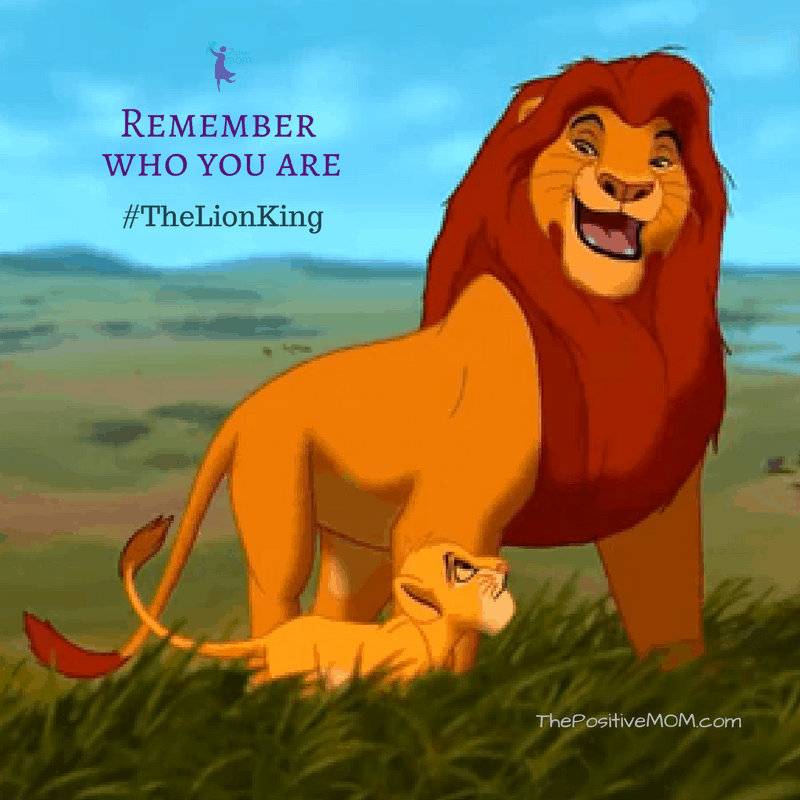 “Look, kid, bad things happen, and you can’t do anything about it.”  ~ Timon (Nathan Lane) 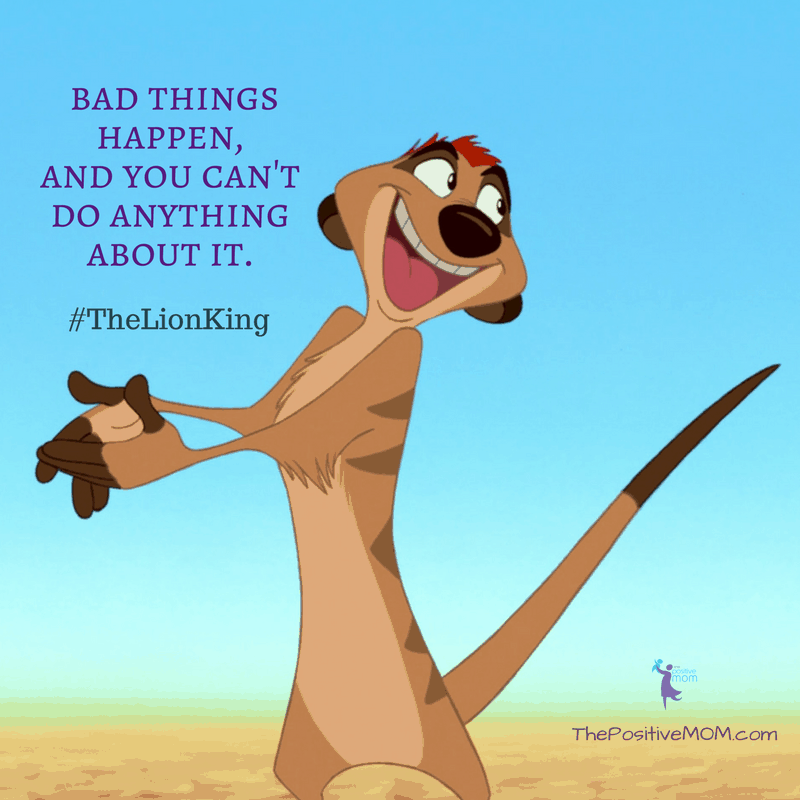 “Everything you see exists together in a delicate balance…You need to understand that balance and respect all the creatures.” ~ Mufasa (James Earl Jones) 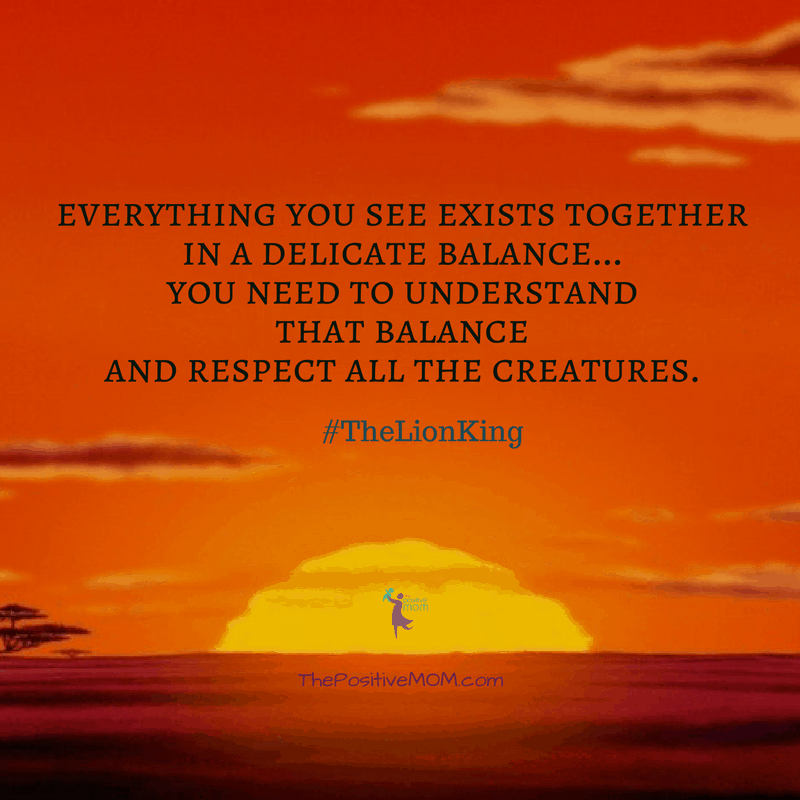 “Oh yes, the past can hurt. But the way I see it, you can either run from it or learn from it.” ~ Rafiki (Robert Guillaume) 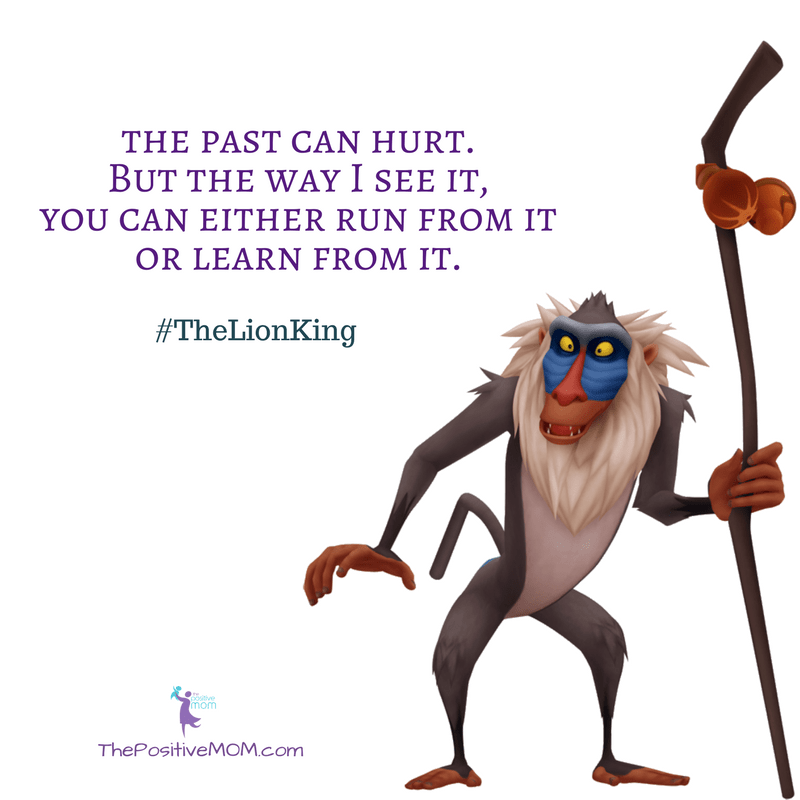 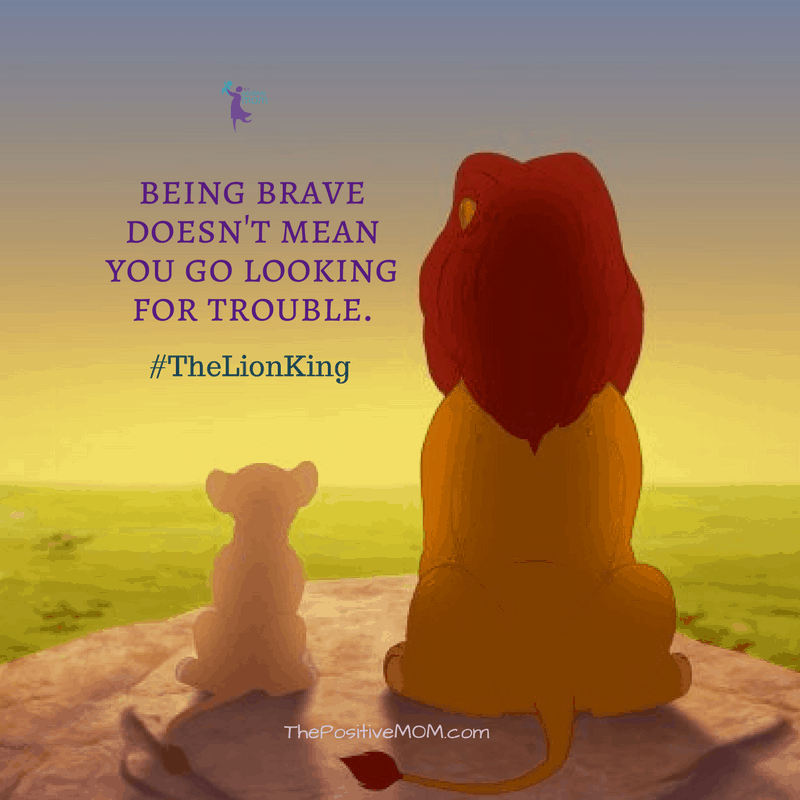 “Hakuna Matata!” (And that’s Swahili for “No worries for the rest of your days!”) ~ Timon (Nathan Lane) 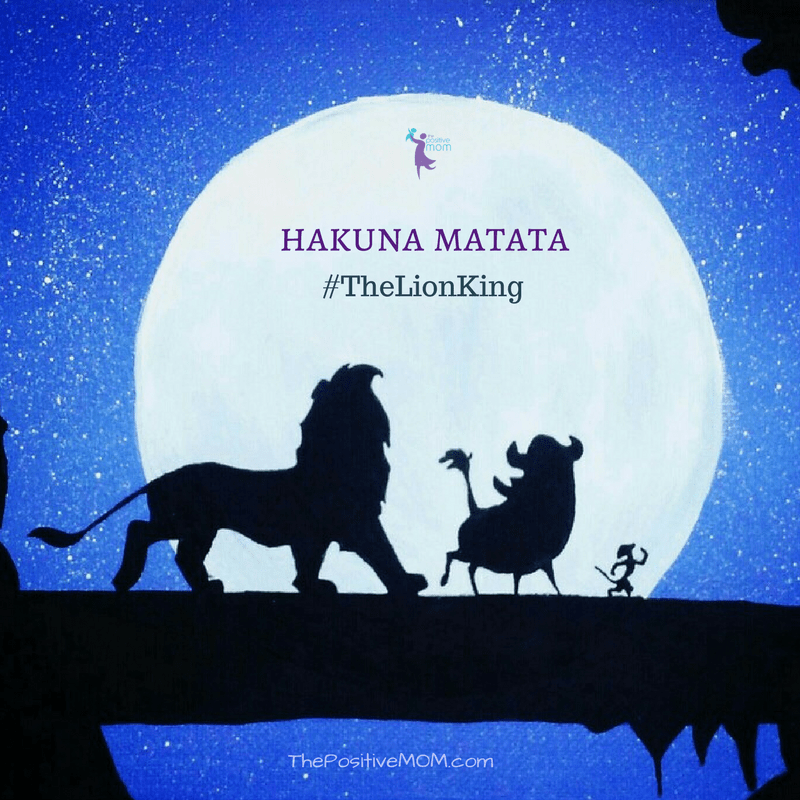 “Look inside yourself. You are more than what you have become.” ~ Mufasa  (James Earl Jones) 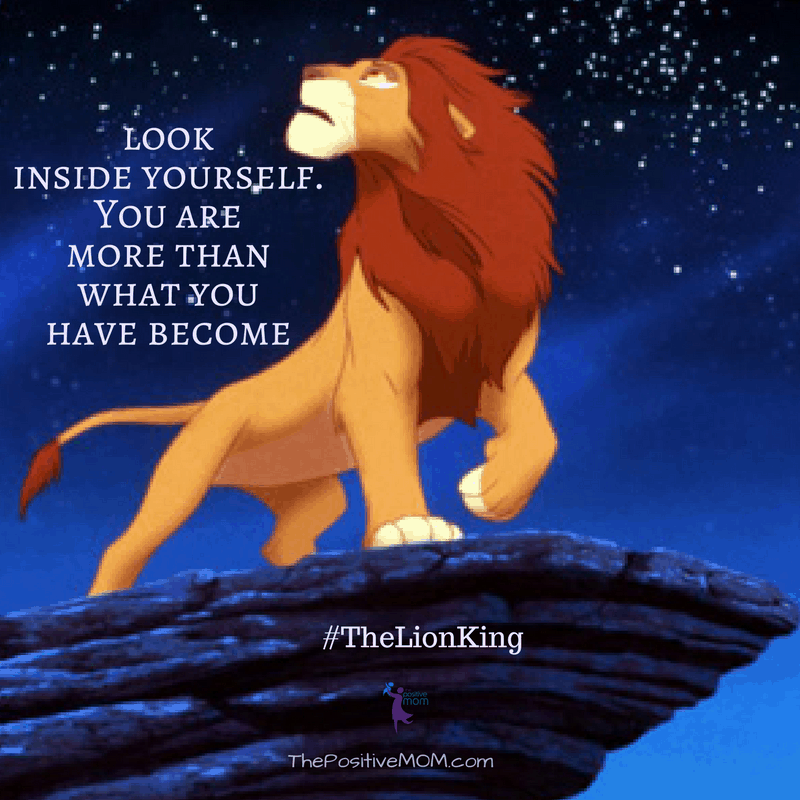 “You can’t change the past.” ~ Simba (Matthew Broderick) 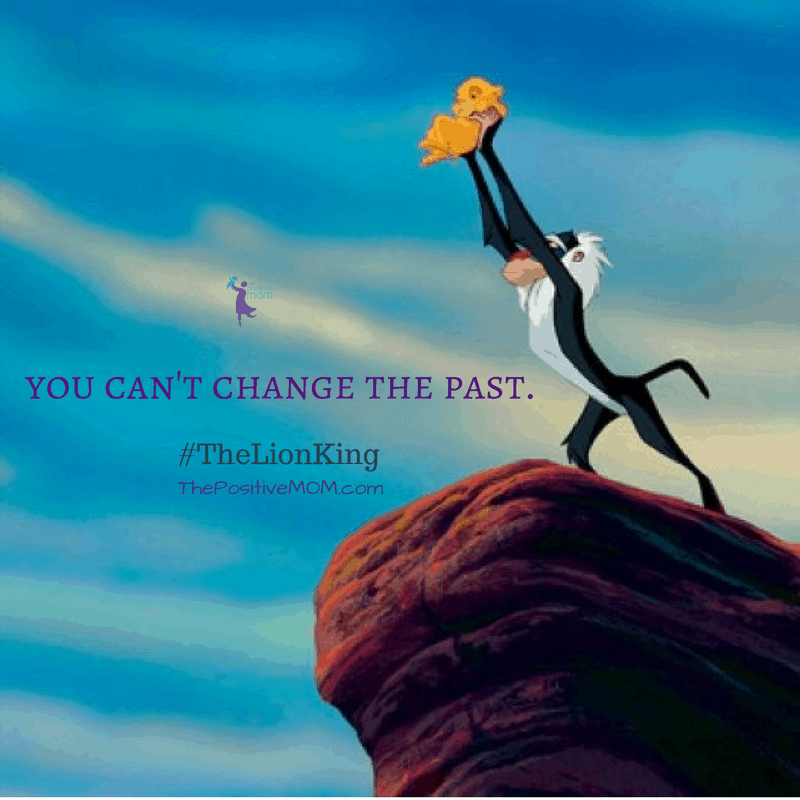 “We are all connected in the great circle of life.” ~ Mufasa  (James Earl Jones) 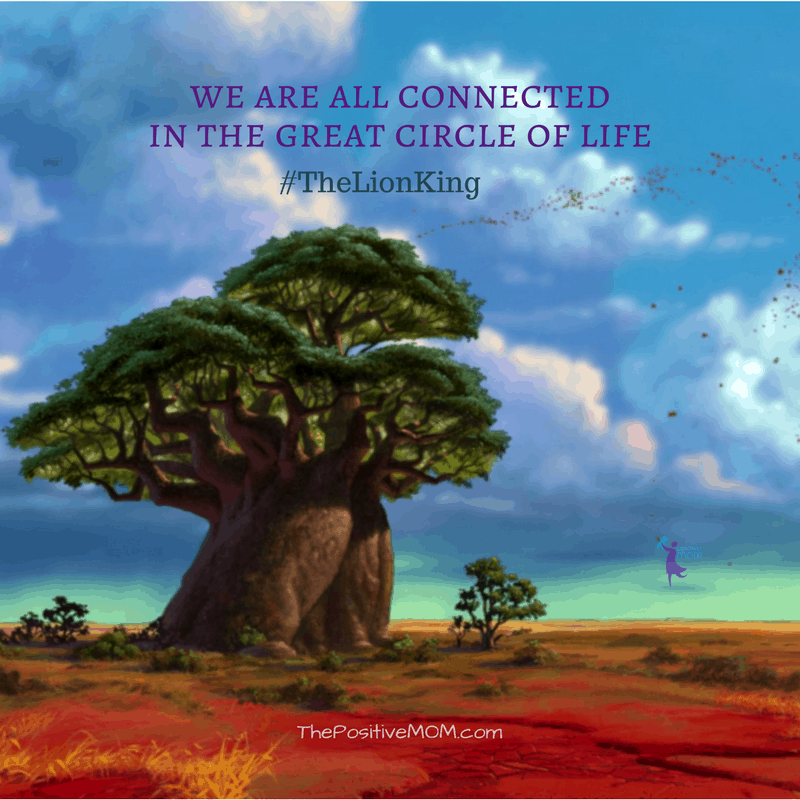 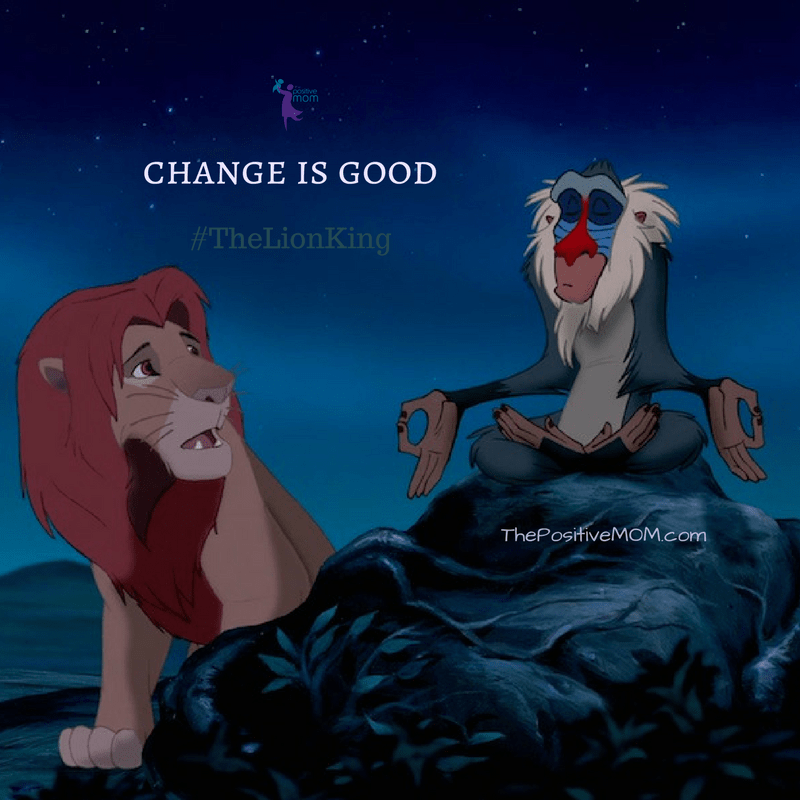 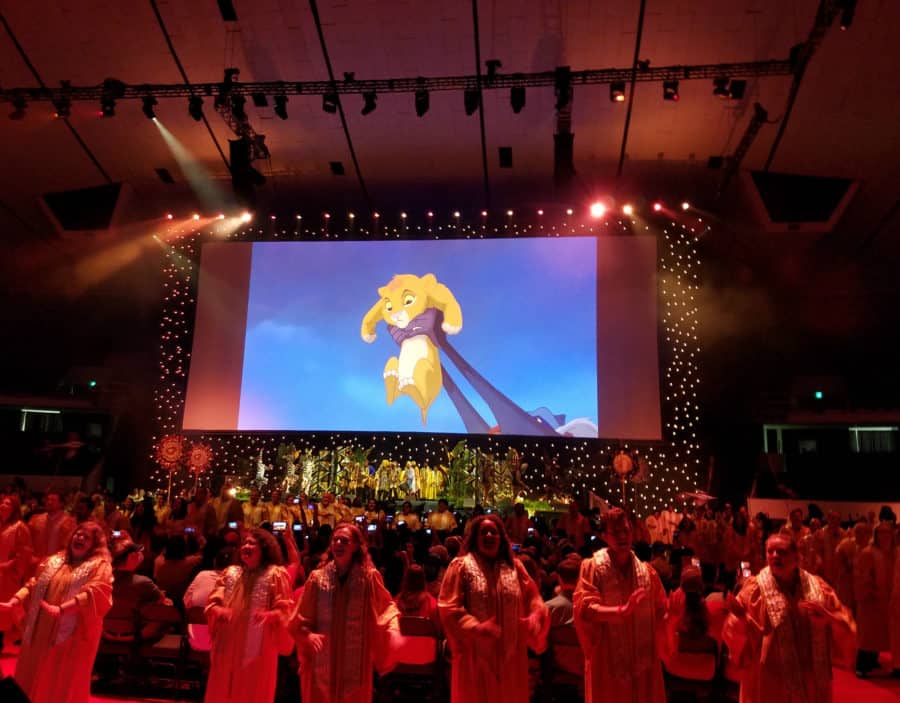 The Walt Disney Signature Collection release includes over three hours of classic bonus material and exclusive, brand new features inviting viewers to sing along with the film’s award-winning music, observe recording sessions, step inside the story room, witness the evolution of a villain, and join Nathan Lane (voice of Timon) and Matthew Broderick (voice of Adult Simba) for an extended conversation regarding the legacy of “The Lion King.”

Two Ways to Experience the Movie!

·       Visualizing a Villain – Against a backdrop of live dancers and the animated “Be Prepared” sequence, artist David Garibaldi paints a masterpiece of evil.

·       The Recording Sessions – Watch rare footage of the actors recording their roles, matched with the final animation. Intro by Roger Allers and Rob Minkoff.

Inside The Lion King Story Room

o    Circle of Life – See how color creates emotion and meaning in the film’s iconic opening.

o    Simba Takes Nala Out to Play – …And, sometimes what seems funny in story meetings never makes it into the film!

o    Hakuna Matata – Co-directors Roger Allers and Rob Minkoff sing, act and dance their hearts out as they pitch the “Hakuna Matata” sequence.

o   Visual Development – Explore a gallery of striking artwork that inspired the movie’s look and feel.

o   Storyboards – Examine storyboards created in the development of “The Lion King.”

o   Layouts – Feast your eyes on layouts created in the development of “The Lion King.”

o   Backgrounds & Layouts – Journey through a gallery of landscape paintings that shaped the world of “The Lion King.”

These offerings from prior home entertainment releases include hours of bonus material, such as bloopers, audio commentary, deleted and alternate scenes, and in-depth journeys into the music, film, story, animals and stage show. 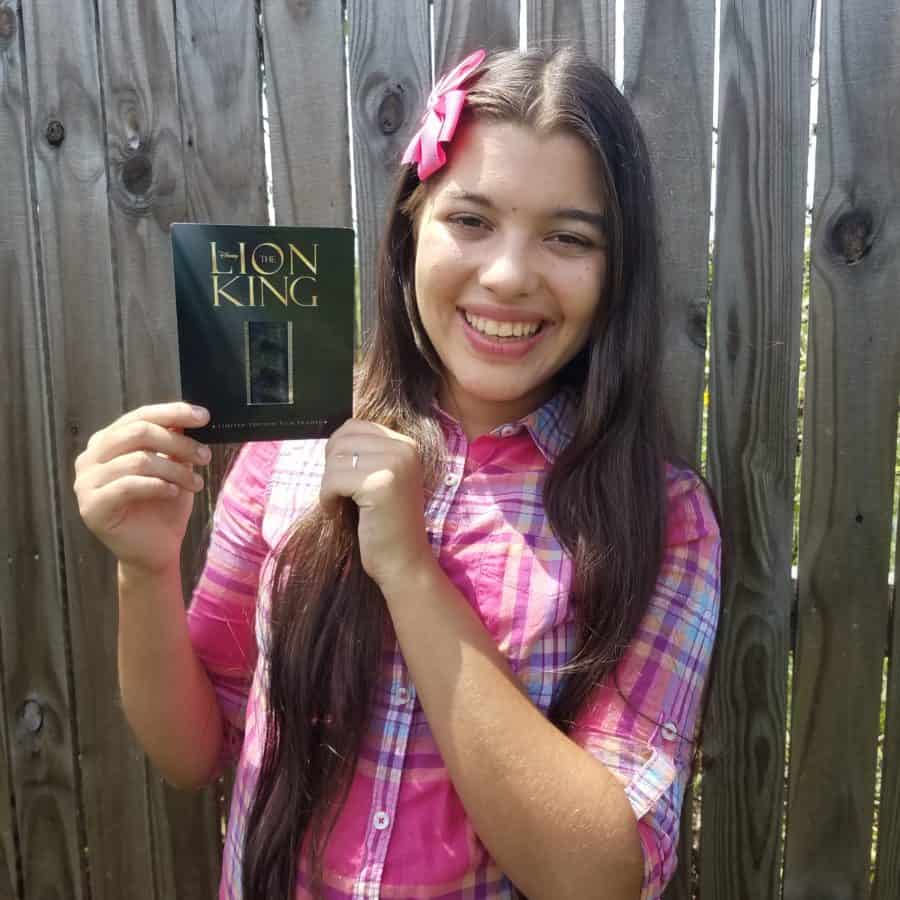 Hurry and get yours!

We’ve been watching The Lion King as a family non-stop since I got my pixie-dusted advanced copy. It’s been a joy to transport ourselves to the beauty of Africa, to dance the hula with Timon and Pumba, cry during that scene that may not be mentioned (and watch it without fast-forwarding), and learn from the wisest and most enigmatic baboon in history: my beloved Rafiki. This moving story is rated G so you can watch it with your little ones and start these necessary conversations with them. I’m so excited that this heartwarming classic is coming out of the Disney Vault and into our homes. While at D23 Expo, during the live-action panel, we all screamed when we heard the legendary tune and words:

We were taken back to the opening scene of The Lion King and remembered once again how adorable cub lions are when they sneeze. In 2019, a reimagined live-action film, helmed by Jon Favreau, will delight audiences with the thrilling retelling of the original tale utilizing groundbreaking technological advances—as only Disney can do. Seeing that exclusive preview of The Lion King live-action movie makes me appreciate the breathtaking animation of The Lion King, 23 years later. I’ll be sharing more updates as they come available.

For now, let’s watch our Blu-ray, Digital, and DVD combo-packs (in English, Spanish, and French) and enjoy soul-stirring music of the first original Disney animated film and my favoritEST of all time!

What is the most soul-stirring lesson you learned from The Lion King? Are you excited for The Lion King’s first ever Digital and Blu-Ray release? Make sure to share your thoughts and to follow along with #TheLionKingBluRay. For more information, go to Movies.Disney.com/The-Lion-King and Follow on Facebook! 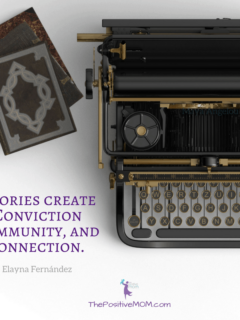 Previous
I Believe In The Power of Storytelling 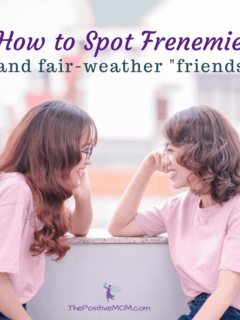 Next
How to Spot Frenemies and Fair-weather Friends
Click here to cancel reply.

[…] The Most Powerful Life Lessons From The Lion King […]

[…] someone who loves God. The made-up phrase in that song “Hasa Diga Eebowai” is poking fun at Disney’s “Hakuna Matata,” and on the belief that having a phrase or mantra is supposed to make everything seem better, but […]

[…] popular music and the distinctive sounds and rhythms of Africa. Rafiki is my favorite character in the animated film and also on Disney’s The Lion King on […]

The lion King is the second movie I remember from my childhood but the one that had more impact in my life as a kid. I remember I went out the theater laughing and excited because of message, the sound, the songs and the way the relationship evolve between the characters. I agree with you, there is wisdom in this animated movie and I love the way it portraits the connection between all that have been create, the power of the past to impact our lives according to the way we face it and the need to live a happy life “Hakuna Matata”!

I love the Lion King and all the wisdom it teaches us. One of my favorite quotes is “We are all connected in the great circle of life.” I'm definitely buying a copy of this signature edition!