Main Page » Articles About Motivation » What to Expect at D23 Expo: The Ultimate Disney Fan Event

After I got back from D23 Expo in California, I’ve been getting so many questions about what D23 Expo is, how it compares to other conventions, and what to expect from “the Ultimate Disney Fan Event.” I am going to answer all those questions, but be forewarned that you’ll be hooked on the D23 Expo magic even before you finish reading my post. 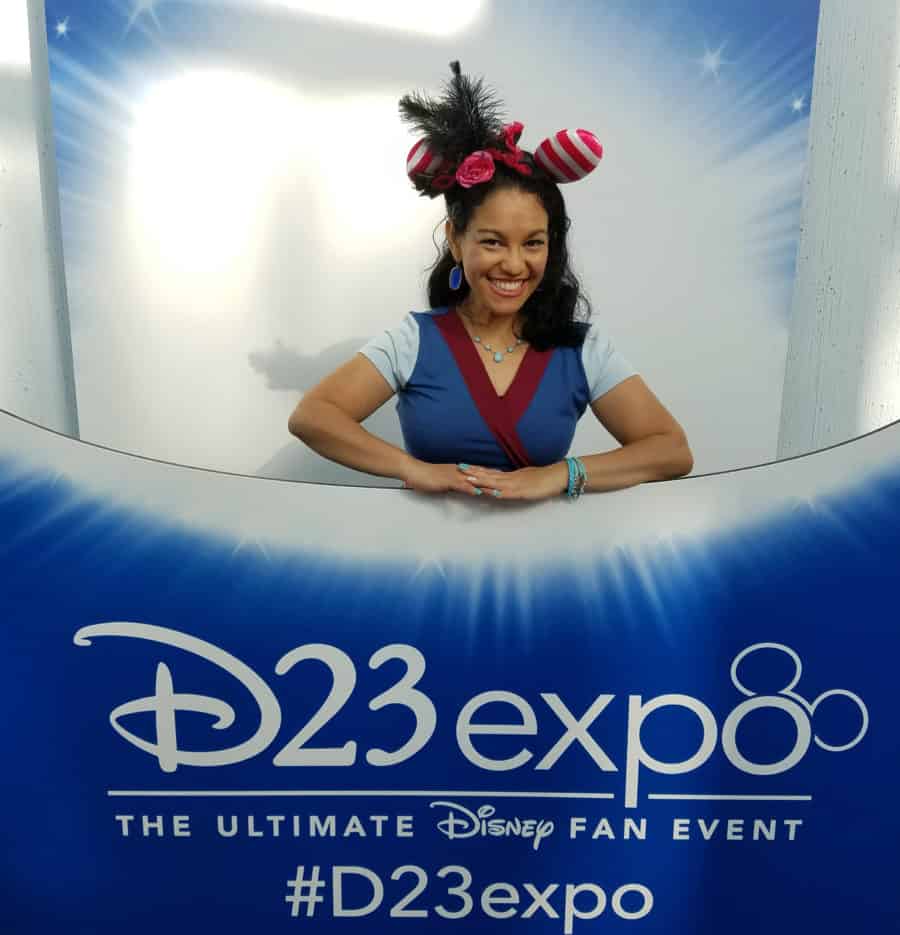 D23 Expo was a like nothing I’ve ever lived before and, as a Disney fan, I don’t think anything will ever top this experience. It’s EVERYTHING DISNEY – a wonder you cannot describe, something you just feel in the air… like a sort of invisible – and highly contagious – pixie dust.

I had the amazing honor to interview Michael Vargo, Vice President of D23 and the Walt Disney Archives to learn more about D23 Expo and share it with you. D23 is Disney’s Official Fan Club. The name is from Disney (“D”) and the year the Company was founded, 1923 (“23”). D23 is a year-round fan club that unlocks the magic of The Walt Disney Company by offering unprecedented access to all things Disney—past, present, and future. 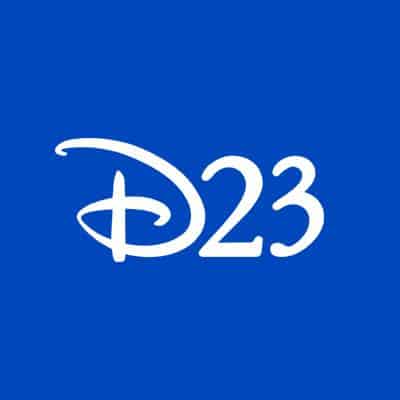 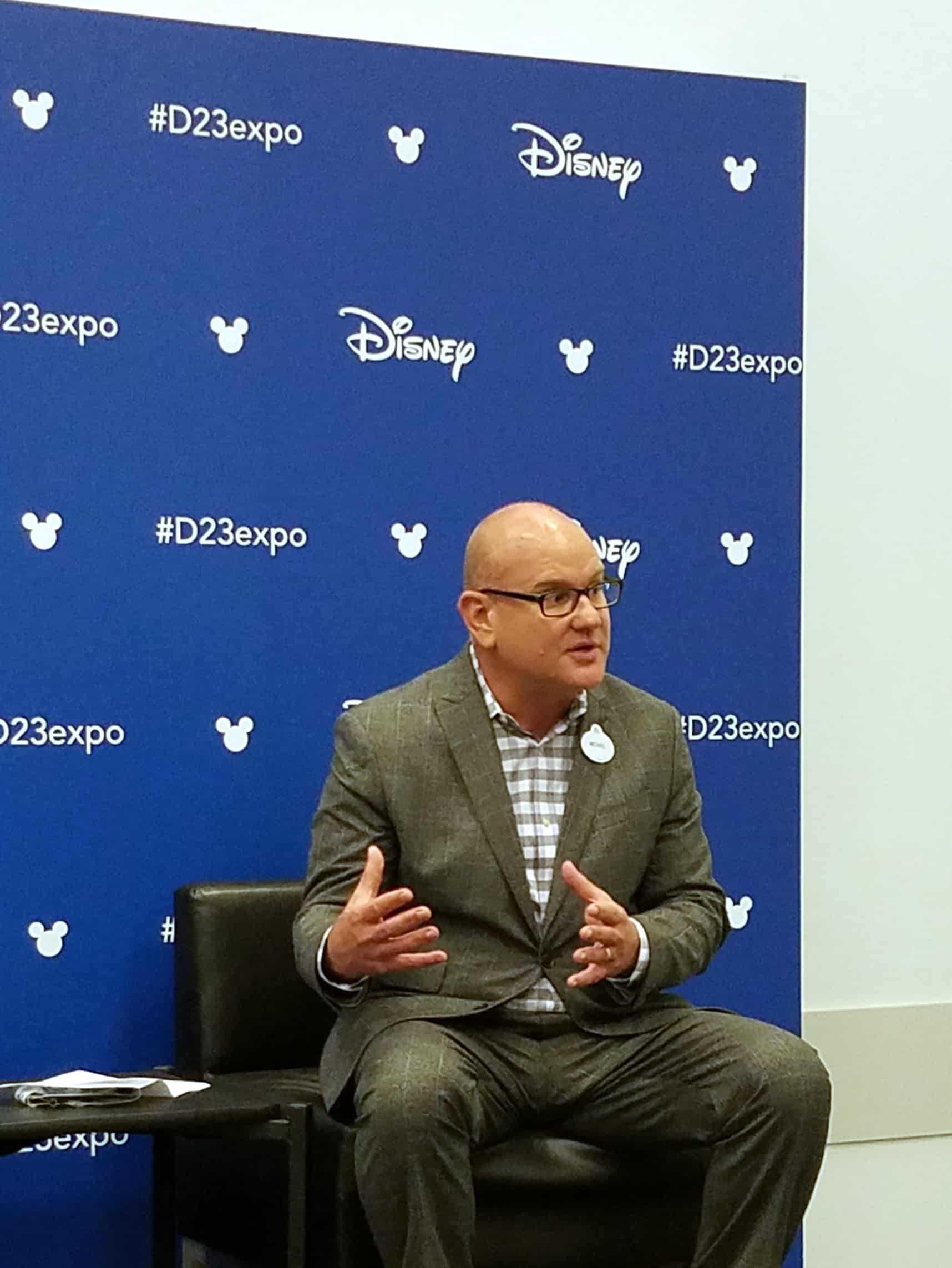 Though this was my first D23 Expo, this was the fifth installment of D23 Expo. Previous D23 Expos were held in 2009, 2011, 2013, and 2015.  Michael Vargo told us that they literally start planning the next D23 Expo the next day after one closes. Fingers crossed that they are already planning 2019. There is a D23 Expo in Japan, as well, which was announced at San Diego Comic Con to take place in February of 2018.

How does D23 Expo compare to other conventions?

If you are a Disney, Marvel, Star Wars, or Pixar fan, then D23 Expo is THE convention for you. While it’s true that there could be some Marvel and Star Wars reveals at other conventions, Disney will always save the best, most exclusive, and hottest announcements and experiences for their devoted fans.

Disney Fans are royalty at D23 Expo, and there is exclusive merchandise, plus, there is nothing like sharing these experiences and opportunities with your sisterhood – Disney fans just like you. This year, D23 Expo gathered Disney fans from all 50 states and 33 countries. 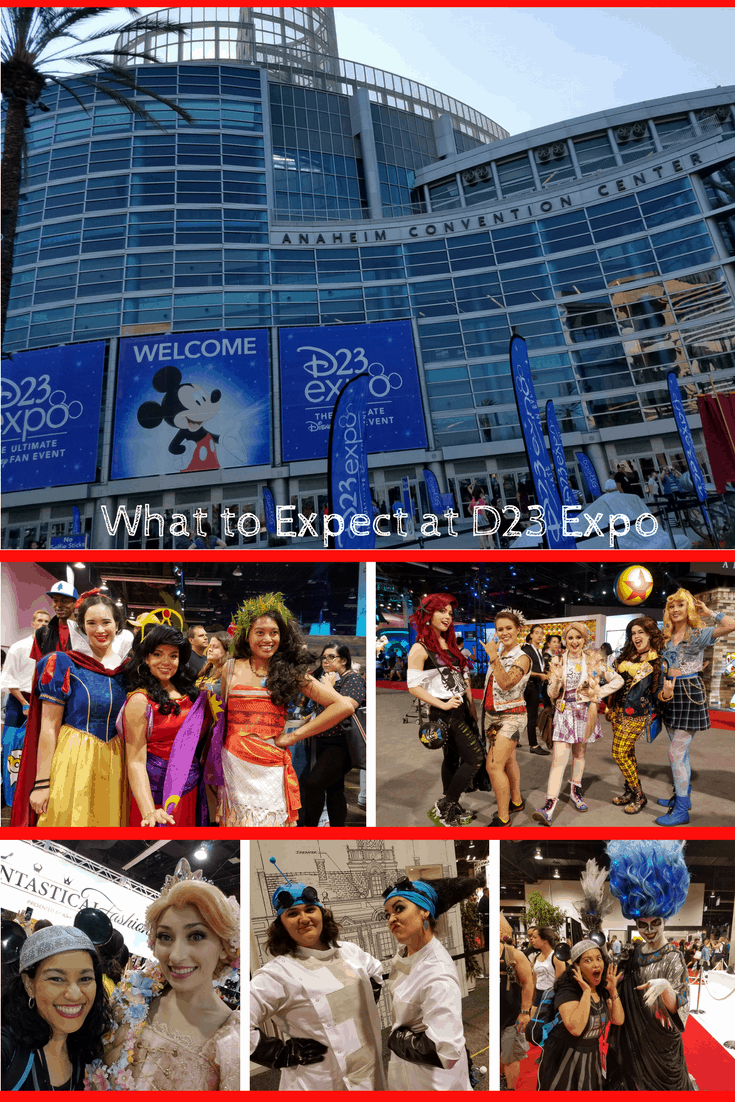 There’s a lot of Disneybounding and Cosplay like you would expect. The costumes are incredible and the different variations are so creative and impressive. There is a contest called Mousquerade in which you can compete for best costume! I went Disneybounding each day but tried to keep it to a comfy level.

What to expect at D23 Expo

D23 Expo offers unique shopping experiences, gaming, dozens of presentations, experiential pavilions, star-studded concerts, and much more! I have been covering several panels I attended, but I want you to know there is so much more!

While D23 Expo organizers don’t encourage lines overnight, many D23 Expo fans do line up the night before main events so they can get access. The long lines are worth it.

And while each panel is tailored to what you are interested in, the highlight of the D23 Expo is the once-in-a-lifetime Disney Legends Awards Ceremony. 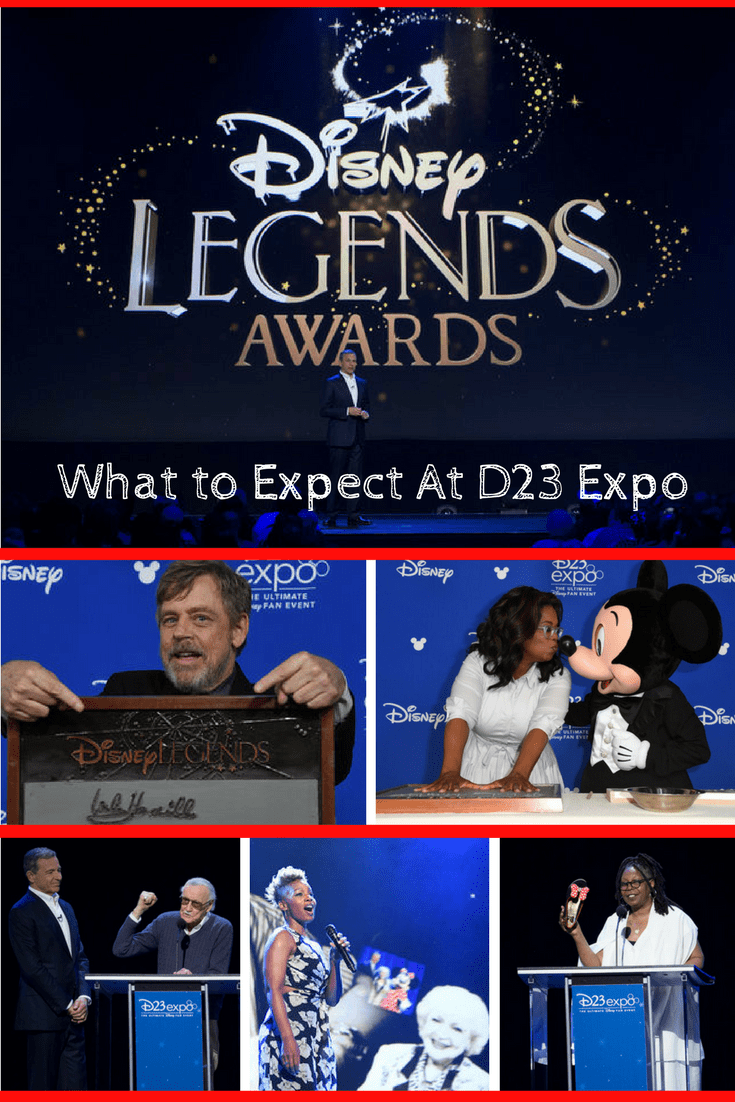 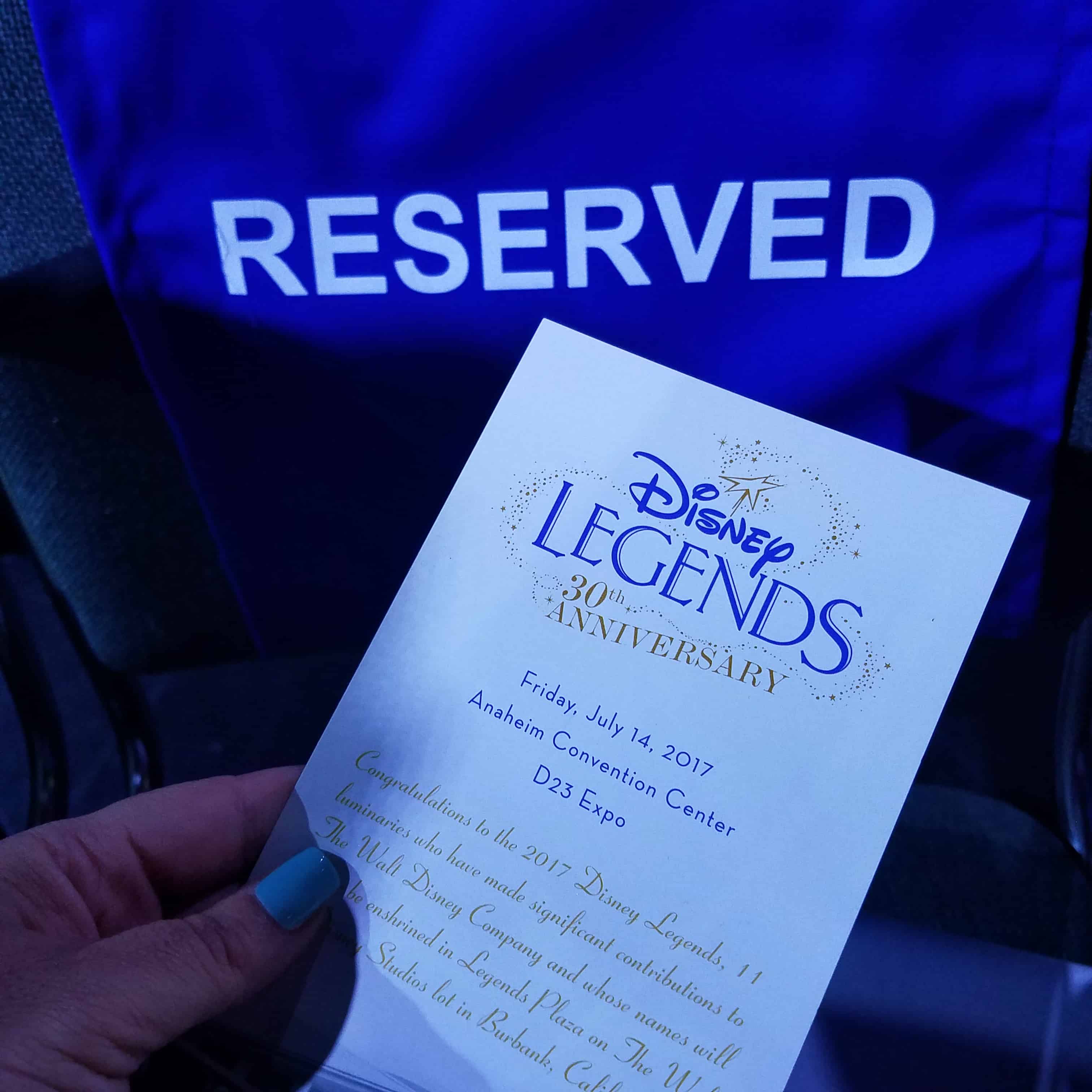 This year marks the 30th anniversary of the Disney Legends Awards. The first Disney Legend was Fred MacMurray (The Shaggy Dog, The Absent-Minded Professor, The Happiest Millionaire), who was honored in 1987.

I cannot begin to tell you how much I cried during this event and how incredible it is to be in the same room with the legends. From hearing Oprah, Whoopi, and Stan Lee talk about their humble beginnings to the Carrie Fisher tribute, this was a moment I will never forget.

You will see a lot in the program and will read exclusives and press releases online about what and who you will see at the D23 Expo, but there will always be more than you can imagine.

One thing you can always expect from Disney is the WOW factor in everything they do.

Recording devices and cameras are rarely permitted in these special presentations, so make sure you take notes, sit back, and enjoy the moment.

Besides the fact that the D23 Expo took up 961,228 square feet of the Anaheim Convention Center including show floor pavilions, presentations, and exhibition spaces, there were more than 161 presentations, panels, concerts, demonstrations, meet-and-greets, and sneak peeks will take place during this amazing Disney fan event. 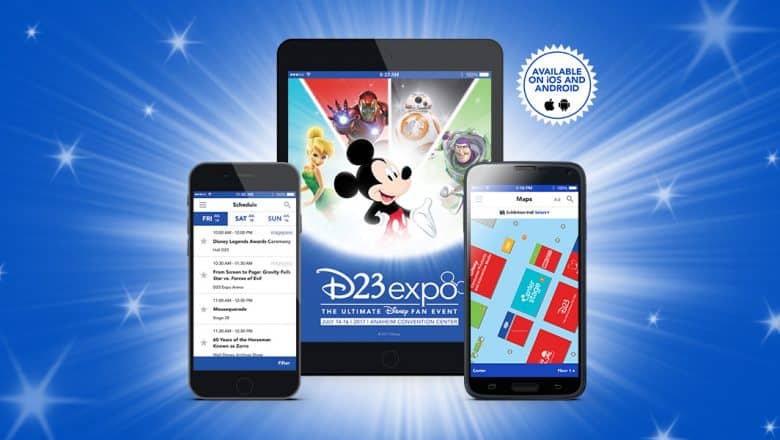 It’s tough to decide what to attend and what to miss! I was looking at all the panels on the D23 Expo app and the D23 Expo website, and I was overwhelmed, so I’m happy I was part of the Disney Bloggers group and the schedule. I suggest that you plan carefully and ahead of time so you can do most of what you wish to do, and to keep an open mind because spontaneous adventures are always the most fun!

There is free Wi-Fi provided and concession stands where you can eat, bring snacks, get bottled water, take your vitamins, bring extra phone chargers, and wear comfy shoes and you’re all covered. 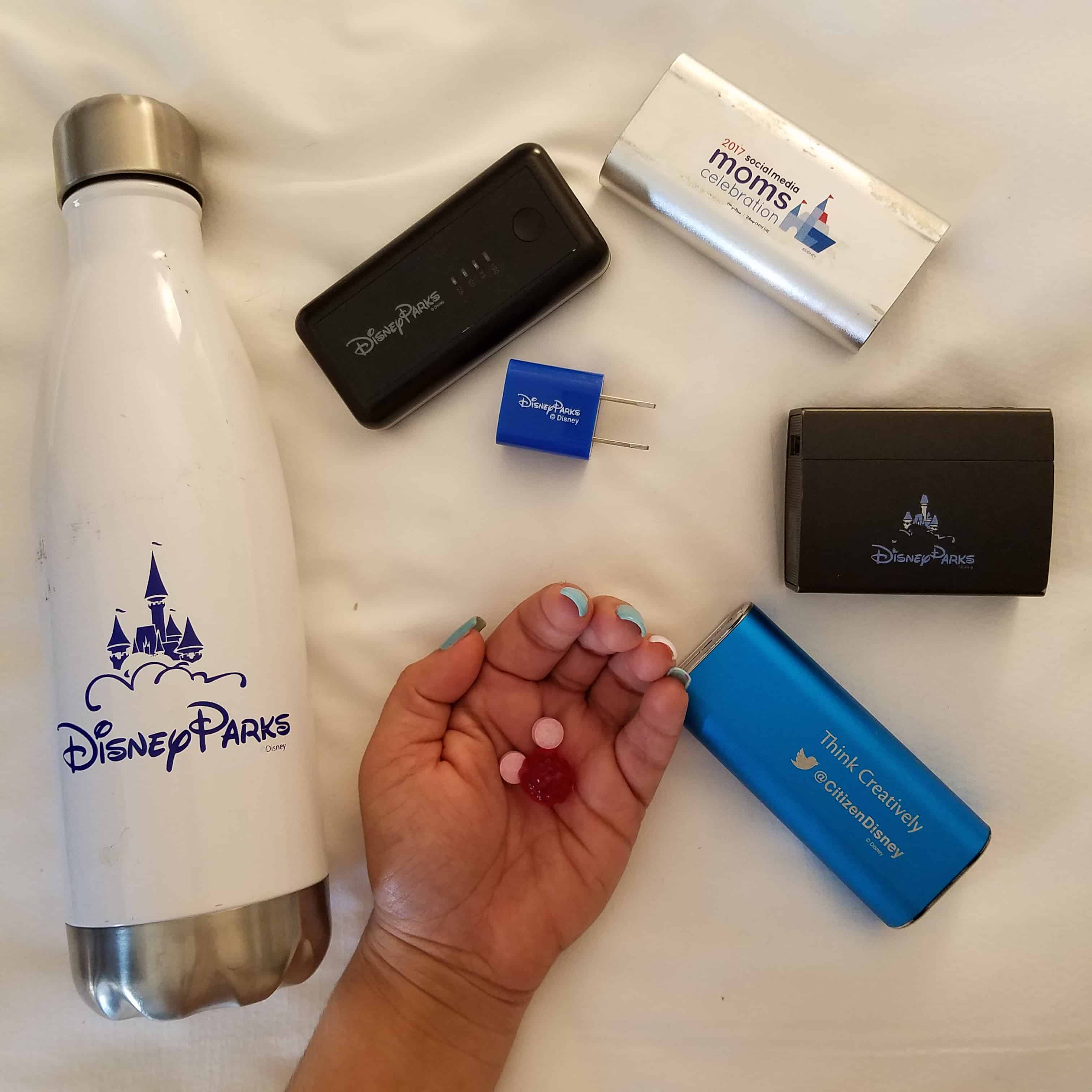 Michael Vargo told us that each year, both the D23 Expo space and the D23 Expo experience increase in size and that they carefully listen to the fans’ feedback to make sure their satisfaction is guaranteed. There was a Guest Services desk in the lobby for questions, plus the D23 Expo staff.

I asked him which type of feedback he reads first, and he said they do the positive first, and the ones revealing room for improvement next, to then end on a positive note again. I love that and I always suggest this because when you create something remarkable, it’s easy to focus on one thing that went a different way than you expected and dismiss the greatness of what you put together.

4- You Can Expect Lots of D23 Exclusive Merchandise

This year, there were more than 800 products making their debut at the D23 Expo in the Disney Dream Store, Disney Store, and Mickey’s of Glendale. There are lines to access these stores, because of the exclusivity and limited edition items.

There are also 61 vendors in the D23 Expo Emporium from fine art dealers and toy makers to travel agencies and Disney fan sites.

I brought home some collectibles and the girls are thrilled. Okay, I admit it, I’m one of the girls! LOL

5- You Can Expect Lots Of Celebrities!

This year, nearly 100 stars from ABC, Freeform, Disney Channel, Disney XD, and Disney Junior made appearances at D23 Expo 2017, including stars from Once Upon a Time, The Fosters, Shadowhunters, black-ish, Descendants 2, General Hospital, Fresh Off the Boat, American Housewife, Elena of Avalor, and Tangled: The Series.

Something that would have been amazing for me to see was the D23 Expo parade, which was Michael Vargo’s idea come to life. It was a twice-daily street party with fun live music, entertaining dancers, and celebrities like Stan Lee, the Descendants 2 casts, Mandy Moore and Zac Levi (from Tangled), Once Upon a Time’s “Hook” (Colin O’Donoghue), and my new friend Mark Hamill (he did “like” my tweets!).

6- You Can Expect Lots of Exclusive Displays

Hundreds of iconic and never-before-seen items were displayed in Walt Disney Archives Presents––A Pirate’s Life for Me: Disney’s Rascals, Scoundrels and Really Bad Eggs. We had a private tour with Becky, who was in charge of the 12,000-square-foot exhibit, and we were fascinated with the unproduced artwork, attraction vehicles, Audio-Animatronics® figures, and props and set pieces from the film franchise.  My favorite was the Black Pearl and Captain Hook’s costume from Once Upon A Time. 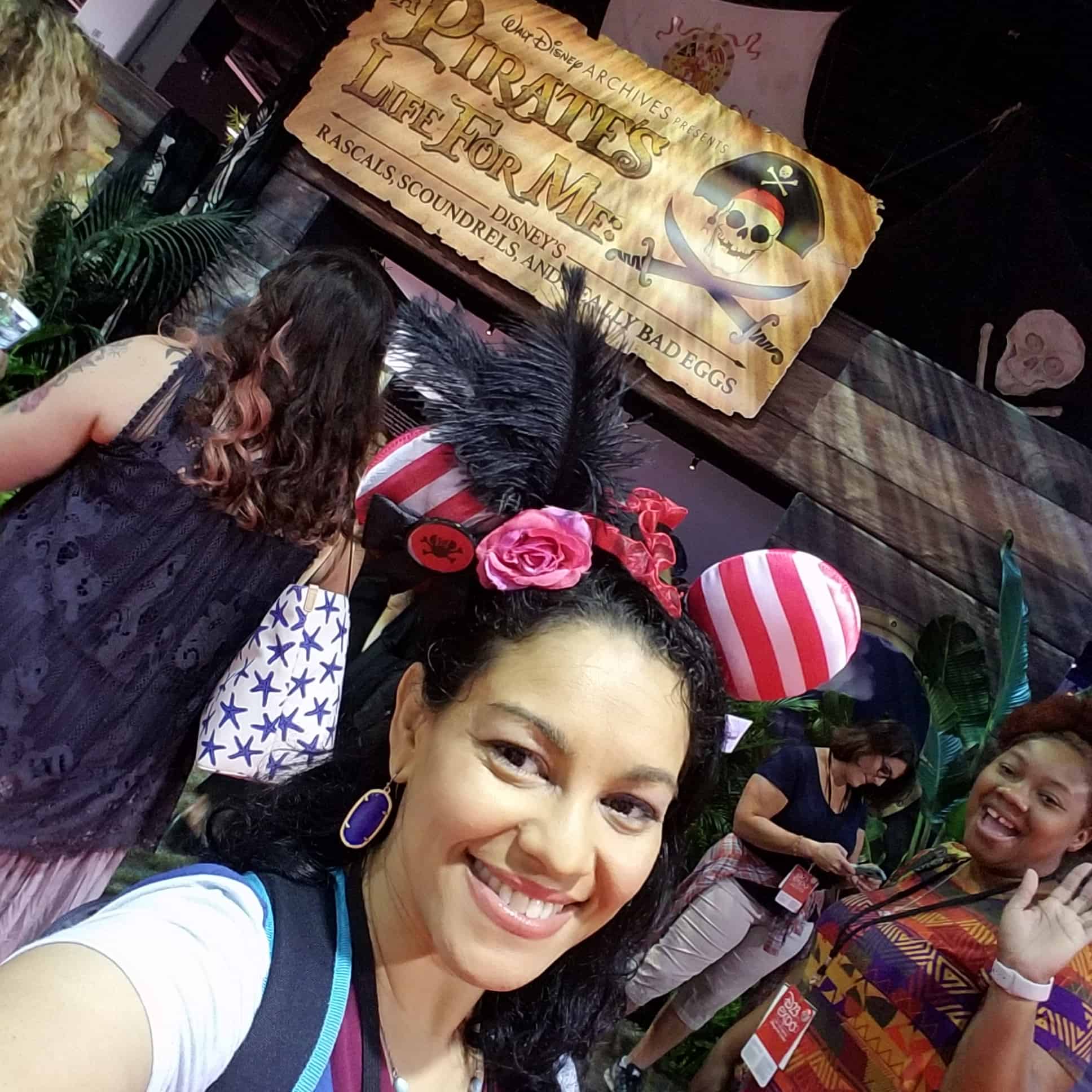 Another amazing showcase was the Walt Disney Parks and Resorts exclusive look at the new Star Wars-themed lands (now named Galaxy’s Edge) currently under development for Disneyland Park and Disney’s Hollywood Studios. Showcasing models, artwork, media, and a fully detailed model of the overall vision, the pavilion will bring the galaxy far, far away to the Anaheim Convention Center.

7- You Can Expect Lots of Disney Music

Sunday was all about Disney music. We attended a wonderful presentation of The Lion King where there was not a dry eye in the room. We met the filmmakers, the voice of Pumba, and others, and got to see Whoopi Goldberg reminisce in her role as Shenzi the hyena. There were laughs and tears in the room and the Circle of Life performance left everyone in awe. 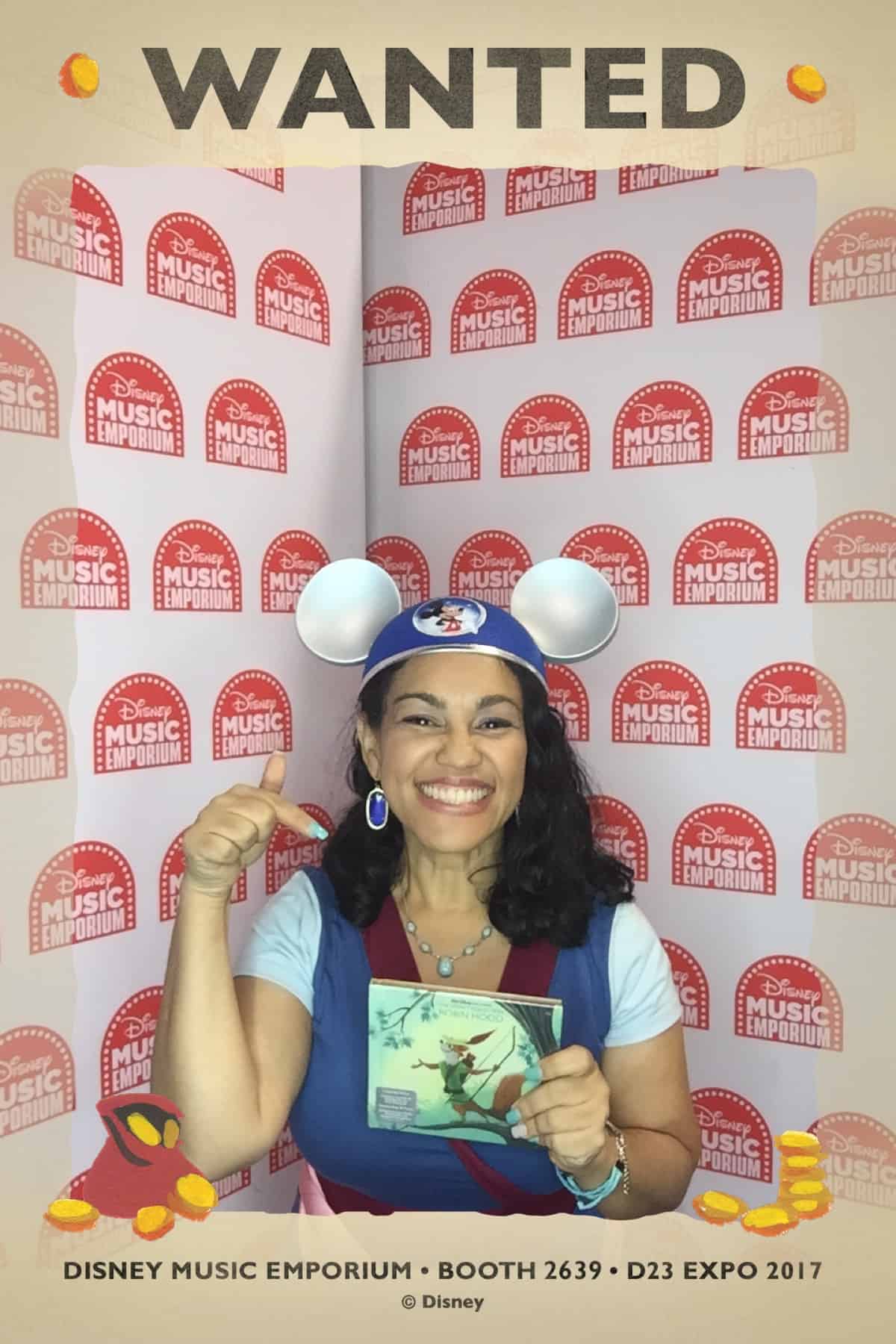 Then we headed to the Disney Music Emporium where we received some treats and we admired the amazing music collection available for D23 Expo attendees. Almost everything was sold out, so you want to tackle your shopping on day 1! 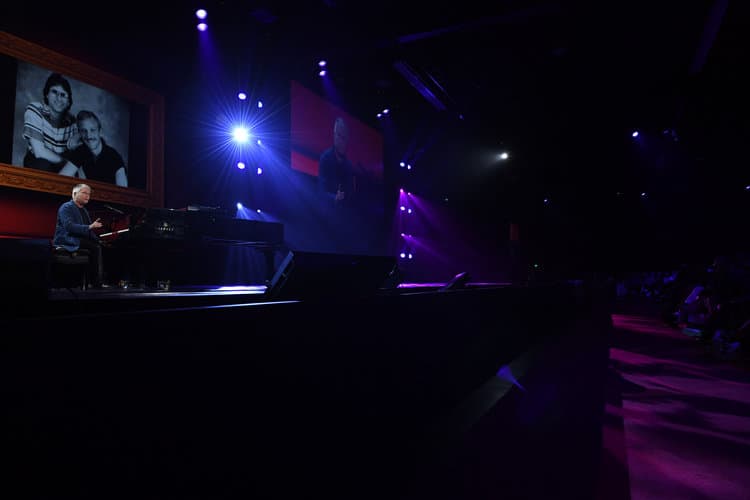 The last event I attended on Sunday to close D23 Expo was the Alan Menken concert. It was surreal to say the least. We enjoyed the music of our beloved Disney films, but also a touching autobiography, as well as a tribute to Howard Elliott Ashman that got me sobbing all throughout. Oh… and when The Colors of The Wind was playing, I was a mess!!! 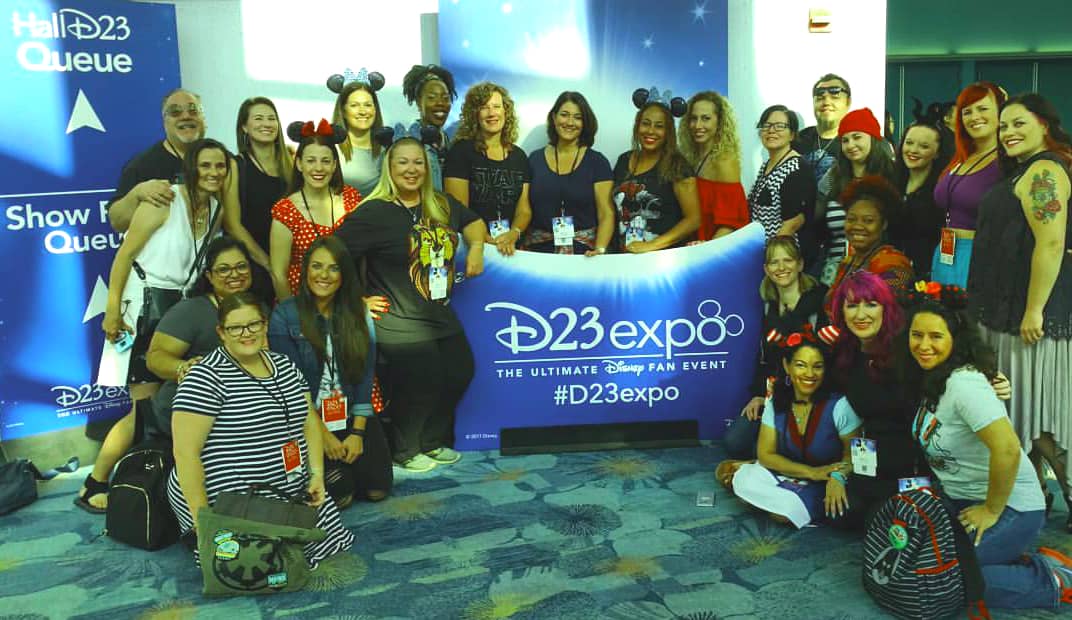 Everyone was amazed and then, at closing, they were on their feet when we learned that Menken will be collaborating with Lin-Manuel Miranda on the live action film for the Little Mermaid!!!

What would you like to see at D23 Expo? Stay tuned for all things D23 Expo as I share my adventures with you, and be sure to follow using #D23Expo #DuckTales #SummerofHeroes #Disneyland and #TheLionKing. 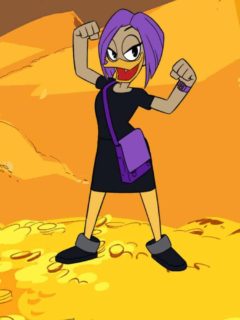 Previous
D23 Expo Recap: Swimming In Money And Getting A Latino Hero! 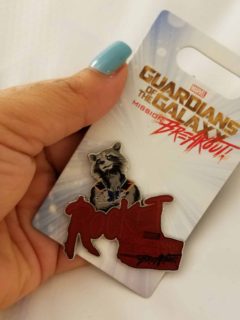 Next
Seize The Chance To Hero Up!
Click here to cancel reply.

[…] the project was announced at D23 Expo, I was one of the few bloggers covering the event, and I was moved to tears because there was an […]

[…] couple years ago I had the honor of going to beautiful Anaheim, California and attending the D23 Expo. I was a little sad I could not make the journey this year, since I am growing a tiny human and […]

I envy you so much for being able to share the room with Stan Lee. That's an experience of a lifetime. Especially now.